John Gowland may not feature in the record books as a household name in Australian motorsport history but he does hold a special place in the archive files.

Gowland was the person responsible for the Falcon nameplate claiming its first Bathurst victory in 1967 with the XR GT.

Gowland, a career-long executive with the blue oval brand, started with Ford in London in 1965 and joined Ford Australia in 1966.

Ralph Hosking was the PR Manager at the time and his department controlled the motorsport program. When current Competition Manager Les Powell retired, a young Gowland went to Hosking and said, “I am your man to run the race team.”

Ford agreed with Gowland, so at the age of 25 he was given the responsibility of steering Ford Australia’s motorsport fortunes that included both circuit racing and rallying.

The Falcon XT GT made its circuit debut at the Sandown Park enduro event and then almost provided Fred Gibson with back-to-back Bathurst wins. He was leading with just 15 laps remaining only to retire with a blown piston, handing Holden their first win on the mountain. The XT GT was not a resounding circuit success.

However it was the 1968 London to Sydney Marathon where the big Fords really shone, with the three-car factory team surpassing all expectations.

Still smarting from their loss to Holden at Bathurst and determined to make amends, Ford upped the ante and introduced the Phase One Falcon XW GTHO in 1969.

Power output and engine size had been dramatically increased with the GTHO boasting a 351 V8 engine. Holden also increased engine power and capacity with the 350 Monaro. At Bathurst that year the mountain would see the debut of both Allan Moffat and Peter Brock.

Joining Moffat in the Ford team were Alan Hamilton, Fred Gibson, Bo Seton, and the Geoghegan brothers, Ian and Leo.

It was around this time that Al Turner was brought in from the USA to develop the Falcon GTHO’s with Gowland remaining in the Competitions Department managing logistics and team administration. Gowland ran Lot 6 Mahoney’s Rd (where the Competitions department was based).

In the first of a two-part series Speedcafe recently sat down with Gowland to talk about those halcyon days at Ford and get the definitive answer on a long held rumor about the ’67 Bathurst winner. The XR GT as it is today on display at the National Motor Museum at Bathurst. It was the first Falcon to conquer the mountain in 1967

Speedcafe: John when did you start at Ford and in what role?

Gowland: I joined Ford in London in 1965 at an overseas sales office in Piccadilly Circus, which was for people visiting Europe. They came here and picked up the car they had bought in their home country and used it for up to six months sales tax free. I was involved in handing the vehicles over to clients. Then I came back to Australia to join Ford in early 1966 in manufacturing as a production planner.

Speedcafe: What year did you become Ford’s Motorsport Manager?

Gowland: It was in 1967 when the Competition’s Department was under the control of the Public Relations department back then.

Speedcafe: How did that opportunity come about?

Gowland: I was 25 at the time and the current Competitions boss Les Powell had announced his retirement. So I met with Ralph Hosking the PR boss and said ‘I was the man for the job’. Fords reaction was, ‘We’re not sure about this young bloke.’ But they did a bit of checking around and thought ‘Well he has a fair interest in motorsport and he’s got half a smart head on him so lets give him a try.’ So that’s how it happened.

Speedcafe: What did it mean to you to deliver Falcon its first Bathurst win?

Gowland: For me personally, it was my job and what I was expected to do and fortunately it worked. I probably didn’t have as big a role in that race as I did in subsequent races but we got there.

Speedcafe: What did it mean to the company at the time?

Gowland: For the company it was really a very important win. It was the time of the Mustang-bred Falcon and it was very much aimed at young people. It really put the nameplate out there in the market place. The Falcon that won that race was a green Falcon XR GT built for Harry Firth and Fred Gibson. Harry prepared the car and when it was ready, I drove it to Bathurst. I always remember Harry telling me that when I got there he was going to do a few little tweaks because there’s a change of altitude at Bathurst and you need to make changes to the carburettor and other bits, all within the rules of course (smiles).

Speedcafe: Today we are used to seeing all V8 Supercar teams with massive trucks and trailers to haul their cars and equipment. In 1967 most teams drove the racecars to Bathurst. Why?

Gowland: Well transport was a bit of a luxury and putting them on a tandem axle trailer was about as good as it got. The Geoghegans drove their car from Sydney. I do know that John Sawyer drove Bob Jane’s Falcon and blew the gearbox driving up there and they had to change before the race and fortunately we had a spare. We didn’t have too many spares then, but we had some. It really was the way to get them (cars) there and the drivers liked a few miles on the cars before the race so it was a good way to run them in.

Speedcafe: The GT’s were basically road cars. What special tricks were employed on the cars, or was that done behind the cover of darkness by the individual teams

Speedcafe: Rumour has it the winning Gibson/Firth Falcon was your company car, is that true?

Gowland: The day after the car had won Bathurst I drove it to Sydney so it could be displayed. Gallaher International, the tobacco sponsors of the race, lent me a Ferrari to drive around Sydney for a few days, which I managed to do (smiles) and then I drove the Falcon back to Melbourne. It went on display at Melford Motors in the city and then I honestly don’t know where it went from there.

Speedcafe: You were also responsible for Ford Australia’s biggest (logistically) motorsport program, the London to Sydney Marathon. What was that like? 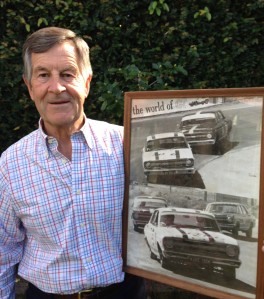 Gowland: “That was a pretty daunting program. Ford Australia made the decision to do it with a three-car team. Ford Britain had a five-car team and Ford Germany entered three. We got the cars, three silver Falcon XT GT’s and it was Harry Firth and Ken Harper together who really prepared the cars. We also prepared a test car and did a lot of miles with that. One weekend it went from Melbourne to Perth to Alice Springs and successfully blew a diff apart at Ivanhoe in southern New South Wales on the way home. That was a huge trip.

We built the cars with the support of four sponsors, Dunlop, BP, Qantas and ourselves. We air freighted the cars to England and I had a call from the Competitions Department from Ford of Britain in Dagenham and they basically thought we had lost our brains in building cars that looked like tanks, were as heavy as tanks, including some of the equipment we had put on them.

I pointed out they had to cross Australia and perhaps we were a bit more aware of what that involved than they were. Anyway, much to my pleasure we won the Team’s prize and I believe we would have done better had one of the drivers not refused to have the axles changed in Bombay. Subsequently it ran a bearing and didn’t please me at all. As we could well have got third, fourth and sixth.”

Speedcafe: What sort of budget did you have to work with?

Gowland: We had a pretty open budget but it didn’t cost an arm and leg to build the cars. That really was just a part of the race program and with the sponsorship of the other companies, it wasn’t exorbitant, I can’t remember the dollars. It cost a lot of money, but wasn’t ridiculous.

Speedcafe: The cars were based on the road going XT Falcons that were incredibly durable in the body, engine and gearbox. While they were modified, were they specially built like the rally cars of today?

Gowland: No way. They were predominantly a base car. We blueprinted the engines and the gearboxes were checked after coming off the production line. The axle housing was strengthened and the shocks and springs beefed up. We had a bull-bar on the front, adjustable driving lights from the cockpit, headlight washers and water running to the front discs to cool them. We had a toilet in the back and we had done some other tricks for the event, like taking our own water across the world so the crews didn’t get sick. We canned water and took it stuffed in the doors and welded a safe under the rear parcel shelf. On my recognisance trip, I collected currency so each car had the correct currency as it went to every border.

They just had to pull the money out of the envelope and they went straight through the borders without having to wait for money. I did a recce in June to the UK but didn’t drive the route. We had other people do some of it; not all of it. But I got arrested on that trip coming back in Kabul in Afghanistan, which was a most unpleasant incident early one morning. I was picked as a gold and drug smuggler, stripped searched, and my luggage was taken. As I say, it was a pretty unpleasant situation.

After a long while they realised their mistake and the Assistant Customs Commissioner greeted me at the airport after the ordeal and said how sorry he was and gave me his driver and Mercedes for the next two days while I was there. He also invited me to have dinner with he and his wife that night.

They were very apologetic and they also said when the event came back, ‘No Ford Australia car would have any restrictions going through Afghanistan.” Let me tell you, in those days Kabul was a pretty wild old spot and there were certainly terrorists and cannibals up in the area the marathon went. It was pretty wild.

Speedcafe: What time frame did the project take from deciding to do it to having the cars start at Crystal Palace?

Gowland: The difficulty was of course we were doing the marathon in addition to preparing race cars for Sandown and Bathurst and also for the Australian Rally Championship which we competed in. We started with the cars in about March that year (1968), with the test car and built the actual cars over a period of three months and then air freighted them to the UK for the start in late November.

Speedcafe: Why did Ford Australia decide to run Falcons and not another model in the Marathon?

Gowland: It was quite simple really. The marathon was finishing in Australia. It was London to Sydney. We were building Falcon’s as a nameplate and it was our strongest vehicle at the time.

Speedcafe: What sort of special training was there for the drivers, crews, mechanics and team management?

Gowland: Not a lot of training other than a few sessions in the gym.

*The second part of the John Gowland interview will be posted on Speedcafe.com in two weeks.