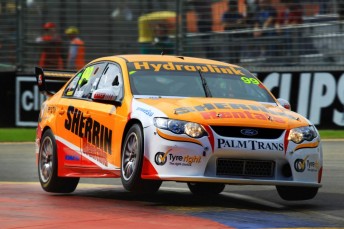 Steve Owen is set to shakeup the Dunlop Series field this weekend at Barbagallo when he replaces Chaz Mostert in MW Motorsport’s Sherrin Ford.

The two-time series winner was heavily linked to the seat by Speedcafe.com immediately after the Ford Performance Racing-contracted Mostert announced that he would graduate to the V8 Supercars Championship with Dick Johnson Racing.

Owen will use the unexpected Dunlop Series miles to prepare for his co-driving role with FPR alongside Will Davison at the Sandown, Bathurst and Gold Coast endurance races.

He will juggle the driving role with his existing race weekend commitments as a coach to Finance Ezi Racing’s Dunlop Series teenagers Josh Hunter and Andre Heimgartner.

“Steve is too good a driver not to be driving this year, he should be in the main series,” MW Motorsport team owner Matthew White told Speedcafe.com, having seen Owen’s skills up close when the pair were team-mates at Britek Motorsport in 2005.

“We had a discussion with Sherrin about who we wanted in the car, and we were really looking for someone who could slot in and do the job that Chaz was doing. Steve is quick, he’s no fuss and I’m sure he’ll get results.” White and Owen both downplayed the chances of mounting a surprise title tilt, with effective series leader Ashley Walsh enjoying a 279 point head-start over the ‘super-sub’.

“I think maybe a few years ago if you turned up in a car as good as the FPR car you may have been able to win the series, but not now,” Owen told Speedcafe.com.

“Last time I won the title (2010) we had more than a round in hand (at the end of the season) but I think these days the field is so good that you’d need something miraculous to happen.

“Our aim is just to go out there, get miles and results, and where I shake out at the end of the year is where it is. The main thing is that I’m ready to go for the Sandown 500 in September.”

Owen has driven for most chassis builders in the V8 Supercars paddock, but will not have steered an FPR car until first practice on Friday.

“I turned up on Thursday, did a seat fitting and away we went. I don’t think it’ll be an issue.”

White meanwhile added that he was disappointed to see Mostert leave after winning on debut with the team in Adelaide.

“It’s definitely disappointing, mainly from a championship point of view, for both Chaz and ourselves,” he said of the 21-year-old’s departure.

“Titles are bloody tough to come by and to have one slip through your fingers when you’re in the box seat is disappointing for us. Time will tell if it’s a good move for Chaz, but from our point of view and for our sponsors, it’s a shame to lose the stability.

“Chaz is very good with his feedback with set-up, so that’s a bit of a hit for the team, but I’m sure Dale, and now Steve, will step up.”

Kiwi Ant Pedersen was also considered as a potential Mostert replacement and tested the Ford at Winton last Monday, but lacks the experience of Owen in the Australian cars.

Owen is expected to race against Pedersen in the New Zealand V8 SuperTourer endurance races later this year.