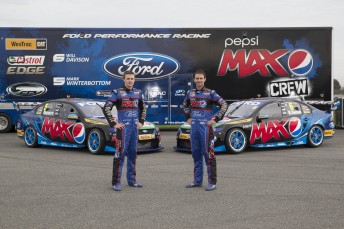 Mark Winterbottom and Will Davison with their revised Pepsi Max liveries

Mark Winterbottom and Will Davison will compete with new-look Pepsi Max Falcons this weekend at Barbagallo as the drinks giant continues its tradition of running multiple liveries per season.

The squad has dropped its polarising ‘graffiti’ look for the cleaner black and blue scheme pictured.

This weekend will mark the first time in FPR’s 11 year history that its two lead cars have run with identical paintwork.

“Aside from winning, for Pepsi Max it’s all about doing things differently and standing out in V8 Supercars, so we enjoy the opportunity to change up the liveries every once in a while to keep it interesting and add some spark to the grid,” he said.

Winterbottom and Davison shared the three race victories between them at Barbagallo last year, with Davison bouncing back from a Saturday shocker with two wins on Sunday.

Davison, who currently leads the 2013 points standings after finishing no worse than seventh over the opening nine races, knows that tyres will again be key this weekend.

“We just have to make sure we hold onto what we’ve been doing so far this season – be smart and keep working hard,” he said of the event.

“Perth offers up quite a different circuit to where we’ve been so far this year and I think it will be quite challenging as the races are very different and so are the cars.

“Under the new format Saturday and Sunday are very different but the same things apply to both. If the car is kind to its tyres it will put you in good stead.” 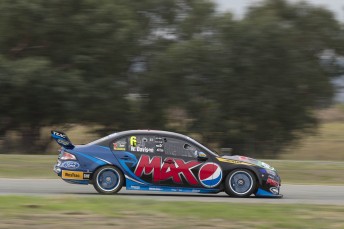 Winterbottom meanwhile sits just 11th in the standings after a frustrating Pukekohe event that saw the #5 Falcon set the fastest lap in three of the four races, yet fail to record a single top 10 finish due to a mixture of tyre failures and on-track incidents.

“Fingers crossed the tyre life is as good as the car pace we know we have. If that’s the case we can win some races,” he said of Barbagallo.

Winterbottom is hoping to move on from the scuffles he was involved in at Pukekohe, which included two collisions with Jamie Whincup, and a post-qualifying argument with FPR stable-mate Alex Davison.

“There wasn’t really much too it,” he said of the heated discussion with Davison, which was shown on the television coverage.

“You try and work it out internally and hopefully that doesn’t happen again.

“Normally a lot of that stuff happens away from it (the television cameras), but unfortunately they caught that.”