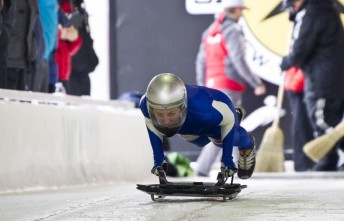 Jess Golding is about to take on a very different form of racing! (PICS: Ron Le Blanc)

Brisbane-based racer, Jessica Golding has gone down a very different track to get her speed fix – she is in training after being accepted to the Australian Skeleton team with the aim of representing Australia at the 2018 Winter Olympics.

Throughout her motorsport career, Golding was the only female to have won an Australian Karting Championship in more than 20 years in 2005.

Following a short stint in the Australian Formula Ford category, she completed her Sports Marketing degree in the UK.

Skeleton is a sport where athletes slide down a bobsleigh track, head first on a sled reaching speeds up to 145km/h and experience up to 5g’s with their chin just millimetres from the ice.

“When I came back from the UK after completing my degree, I was keen to get back into some form of competition. Racing karts is what I love to do and we could do so competitively within our own budget and the few times I returned to Australia we were competitive” said Golding.

Her physio, Chris Brady from the Queensland Sport Medicine Centre and V8 Supercar team Red Bull Racing Australia, suggested Jess check out the sport of Skeleton. Brady, for many years, has worked with high profiled athletes in motorsport and Winter Olympic teams.

“Chris often commented to me how much synergy there would be between skeleton and motor racing,” Jess explained. “The idea stuck with me and from there I began communicating with the Australian skeleton team.”

The opportunity finally came to reality to try out for the Australian Skeleton program earlier this year. A secret visit to Calgary, Canada home of the 1988 Winter Olympics and set to the cult film Cool Runnings – put her through an intensive on-track testing phase. It was then a baptism of fire competing in the final round of the North American Cup at Lake Placid, finishing a more than credible 12th amongst highly experienced sliders. She has since been accepted on a partial scholarship into the Australian Skeleton program with an invitation to compete in the North American Cup 2013/14 season representing Australia.

Golding in full flight on the Lake Placid ice course

“A typical Skeleton racer comes from other sporting disciplines – it’s not uncommon for a sprinter to transition to the sport, but for me it’s motorsport.

“Taking race lines and understanding corner apexes and so on was a skill set I could bring across from racing, which is partially why the Australian Skeleton program was so interested in me in the first place,” she explained. “In motor racing, I’d be among up to 40 competitors on the track – and don’t get me wrong I love that – but there is something really peaceful about racing against the clock. The only person I have to worry about is myself. Its just me and the ice.”

Golding has since been selected as a development slider for team Australia and is currently working towards competing in the North American Cup with the ultimate goal to represent Australia at the 2018 Winter Olympics in South Korea.

“As a development slider I will be only partially funded this season, but we need to raise funds for equipment and of course living and travel expenses. Realistically, I need to raise about $20,000 before the next season. We have a couple of sponsors in Oscar Oscar Salons and Fitnance Australia on board at the moment – who I’m very grateful for, but we need some additional support for the full season.”

Jess has established a fundraising page at http://www.gofundme.com/jessgolding for supporters to donate to her goal.