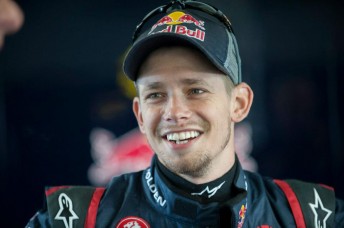 The two-time MotoGP World Champion will be in action at Barbagallo’s second round this weekend – a full two months after making his debut in the Adelaide season opener.

It was a promising if troubled first outing for Stoner, who crashed out of the first race after a series of tyre lock-ups caused a failure, before clawing his way from 30th to 14th in Race 2.

Stoner set the eighth fastest lap of the Race in the second encounter, the quickest of the 15 Holdens in the field, and is expected to be even more comfortable in his surroundings at the first permanent venue of the year this weekend.

With Stoner currently sitting 23rd in points, Russell says that limiting the points deficit during the next two events will be key to where the 27-year-old ends up come December.

“I think he and I would both be disappointed if, once we get into the thick of it, we’re not racing for the front (positions),” said Russell, who last year engineered rookie Scott Pye to second in the final series standings, when asked of Stoner’s title chances.

“But I think that because the championship’s only seven rounds there will be a learning process. 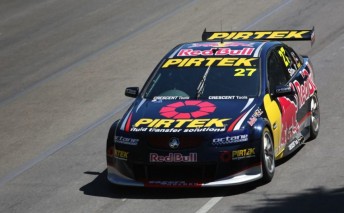 “So the question is can you do enough in those first three races to put yourself in the right position for the end? If you look at what Scott (Pye) achieved last year, anything’s possible.”

Russell is one of the most highly experienced engineers in V8 Supercars, with his background including a long association with Williams that included three stints as part of its Formula 1 outfit.

Spending time at Ford Performance Racing and Brad Jones Racing in the mid-2000s before moving back to his native England, Russell joined Triple Eight in 2011, and says that his current role working alongside Stoner is proving highly enjoyable.

“It’s a refreshing change to work with someone who has obviously had experience and success on two wheels and he really has immense maturity for what he’s done at his age. It’s good fun,” he said.

“It’s just a matter of us working out between us how he can manage his car by changing the settings, rather than moving his body weight around as he would do on a motorcycle.”

Stoner meanwhile is typically downplaying his chances ahead of the Barbagallo meeting, where he’s expected to be a key drawcard for fans.

“I’m not really expecting too much from this season to be honest,” he said.

“I first and foremost want to enjoy it, but, you know, I’m a competitive driver, I’ll still come out and we’ll see where our results end up.

“But we have no real goals set, just to try and learn as much as we can, pick up what we can and see where we end up at the end of a weekend.”

He added of whether the V8 Supercars scene is proving to be as much fun as he’d hoped: “I believe so, yes. Being around Australian competitors, I think everyone seems to get along fairly well with each other, and I think the racing is a heck of a lot of fun, so I’m looking forward to getting back out there.”