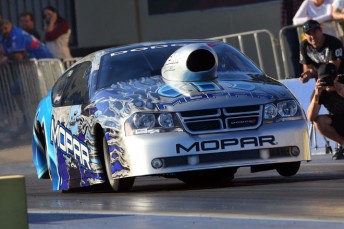 Just 16 places are available for the 25 Pro Stock machines that will make their way to Sydney Dragway this weekend for the Nitro Champs, with many predicting the category is on track for a record breaking weekend.

Mopar-backed driver, Lee Bektash will debut a stunning new Dodge Avenger at the event and confidently says almost half the field will approach the six second bracket.

“My prediction is that there will be six cars into the sixes by the end of this event and the top qualifier will be around a 6.96,” said the Victorian. “These cars rely on weather to get the quick times and if we see weather like we had in testing last weekend, then we are going to see a lot of six second runs.”

“It’s going to be an exciting race for the fans especially with 25 drivers all looking to run their best numbers just so they can make the 16 car field,” said Grima – who enters sitting second in the Championship behind Wayne Daley. “That’s going to be tough and with the Nitro Champs known for it’s great conditions it’s going to be game on.”

PC Group driver, Grima went on to confirm this time of year in Sydney weather wise is perfect for the Pro Stock machines.

“These cars do not perform well in the heat of summer, but this weekend should see the conditions a lot cooler and provide the atmospheric air that these cars crave on,” he explained.

Heavy-hitter Bektash’s new Mopar Avenger was built around NHRA Pro Stock legend, Allen Johnson and he concludes that he feels more comfortable in the machine – given he and Johnson are of a very similar build.

“It’s built around somebody my size, AJ is not a lot bigger than me, so it feels like it was built for me, basic things like the steering wheel is in the right place,” he said. “This is a one off car. It’s a ‘double rail’ car so it looks more like a Top Doorslammer on the inside; it’s definitely heavily engineered.”

The Nitro Champs at Sydney Dragway this weekend (May 3-5) is one of only three Australian drag racing events where every professional category races on the same bill.