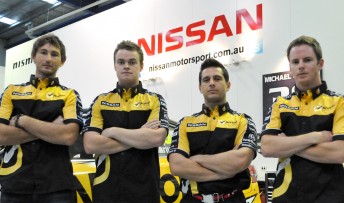 Nissan Motorsport has completed its co-driver line-up for the V8 Supercars Championship’s endurance races with confirmation that Taz Douglas and Daniel Gaunt will steer its Norton 360-backed Altimas.

As previously reported by Speedcafe.com, the pair will team with James Moffat and Michael Caruso respectively.

Like Russell, Gaunt competed with the then Kelly Racing branded team in last year’s endurance races, finishing 19th at Bathurst alongside Reindler.

Both Douglas and Gaunt are currently racing full-time in the Dunlop Series, driving an Image Racing Ford and Eggleston Motorsport Holden respectively.

Gaunt also competes full-time in New Zealand’s V8 SuperTourer class with Tasman Motorsport, ensuring he’ll race a Ford, a Holden and a Nissan during the 2013 season. 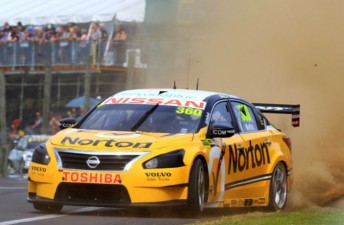 Moffat gave it plenty at Pukekohe

The four co-drivers will appear in the Sandown, Bathurst and Gold Coast events under the Endurance Cup format this year, while they will also steer the Altimas in the Friday co-driver practice sessions in Townsville, Ipswich and Winton.

“I haven’t driven one of the new-generation V8 Supercars yet, but from what I’ve heard, there’s a lot of similarities to the old cars and a lot of changes as well,” said Gaunt.

“Apparently, the differences are similar to the V8 SuperTourer that I’ve been racing in New Zealand for the past year, so hopefully there’s no major transition phase.

“It should just be a matter of getting up to speed and learning how Michael likes the car.”

Gaunt and Douglas have previously raced in the V8 Supercars Championship as the primary driver for Lucas Dumbrell Motorsport.

Douglas completed the full season last year, and says that he’s hopeful of a strong result alongside Moffat.

“Moffat has been going really well in the championship so far, and the Nissans have been showing better speed than what many have expected,” he said, with Rick Kelly having taken Nissan’s best race result of seventh last time out at Pukekohe.

“I think with our experience together, there’s no reason why we can’t get a solid result.”

Moffat acted as mechanic to long-time friend Douglas when the latter was competing in the 2005 Victorian Formula Ford Championship.

The Nissans are guaranteed to command plenty of the limelight at Bathurst this year as the manufacturer returns to The Great Race for the first time since the second of its consecutive victories in 1992.

It’s 2013 campaign has been hampered by an underdeveloped engine during the early races – a situation that the team hopes to have sorted by the endurance events.

Check out the video of the announcement