Possum Bourne was the godfather of rallying in the southern hemisphere. Today marks the 10th anniversary of his death at age 47 on the Waiorau Snow Farm Road at Cardrona.

The fragility of life was tragically fortified when Peter ‘Possum’ Bourne, the greatest rally driver the Antipodes has produced, died when he was not even in the heat of battle.

Bourne was a master of a sport that perhaps requires more skills and where drivers face more hazards than any other form of motorsport.

Preparing for the Race To The Sky event in the Cardrona Valley near Queenstown in New Zealand, Bourne’s car was struck head-on by Jeep Cherokee that had strayed onto the wrong side of the road coming downhill.

After suffering serious head injuries and two broken legs in the accident, a decision was made to turn off Bourne’s life support machine on April 30, 2003, 12 days after the accident.

Possum was in the prime of his career and had left behind wife Peggy and three children, daughter Jazlin, aged three, and two sons, Taylor, eight and Spencer, four.

Bourne was a heck of a driver, a hell of a bloke and a great father and husband with a booming laugh who remained firmly planted as a person.

Subaru Australia led an avalanche of commendations for the fallen driver.

Part of Subaru Australia boss and proud rallying scholar Nick Senior’s thoughtful tribute said: “He was always accessible to the media and his fans, indeed to everyone who wanted to chat, because Poss loved a chat,”! The magnificent bronze statue of Possum has been recently relocated to his hometown, Pukekohe

“Nothing typifies his competitive spirit more than his 2002 championship win.

“Some people said he had no hope after switching from the World Rally Car to Group N production class. When he didn’t take a point from the first round, they said he had even less hope. Yet his competitive spirit and skill shone through and Possum clinched his seventh consecutive title.

“He was not only THE driver of his generation, but arguably the best to come out of the southern hemisphere.

“But more than the results was the tireless effort of Possum to grow the sport of rallying.

“It was not unusual for him to fly from New Zealand to Sydney for a five-minute television interview on Sunday and return home on the next flight.”

Possum had an unwavering connection with the sport. He was naturally gifted at running the gauntlet over special stages in the bush. The passion he had for rallying was reflected in his impeccable results.

Possum would declare in the year before his death: “I have a real love for the sport. I mean, someone gives you a superb rally car, you have a group of trained technicians to attend to the car’s every need, and you are allowed to go out on some of the best forest roads in the country and drive flat out. That sounds like a dream come true to me. 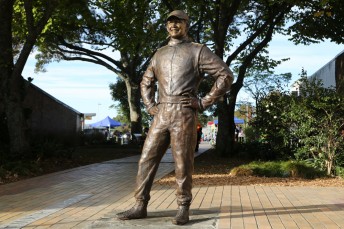 The statue stands in the heart of downtown Pukekohe

“Seriously though, I love the thrill of driving and I love being part of a team.”

And that summed up the character of the greatest Kiwi rally driver in history.

In 2000 Bourne was joined by Queenslander Mark Stacey in the STRA #1 car, the pair going on to win their respective driver and co-driver categories in the ARC from 2000-2002. They were also contesting the Production Car World Rally Championship in 2003 before tragedy intervened.

Stacey was moved to say: “Words can’t explain how I feel about losing Possum. An absolutely brilliant driver and a fantastic friend and mentor.

“Yes we have lost our Possum, but we, as part of rallying, must not lose his incredible motivation and enthusiasm.”

Cody Crocker said: “Ever since we met him at the Rally of Melbourne in 1997, he’s been an inspiration. Greg (Foletta) and I always remember him leaning in the window of the car in that casual way of his and asking how we were going. We were amazed that he had the time to bother.”

Dean Herridge said: “There are so many things that I have been able to learn from Possum over the years. He had such passion for the sport that I love, and a fighting spirit like no one else.” Although he was a proud Kiwi, Possum was the prodigal son of Subaru Australia. He did the brand proud after Subaru Rally Team Australia was conceived in 1996.

Acknowledged as the driving force of SRTA, Bourne’s career list of rallying achievements is highlighted by winning seven unbroken Australian rally titles for SRTA from 1996-2002 and Asia-Pacific Champion in 1993, 1994 and 2000.

By 2002 SRTA then took on Dean Herridge in a third car but was back to two cars following Possum’s death in 2003. Then on November 2, 2005, Subaru closed one of the most storied chapters in Australian rallying when it announced that SRTA would not continue in 2006.

Several weeks ago the life-sized bronze statue of Possum ,commissioned by Grant Aitken, which had originally stood as a sentinel overlooking the Cardrona Valley in Central Otago, was moved to Pukekohe, the rally ace’s hometown south of Auckland.