PIRTEK POLL: Who will win the 2013 Dunlop Series?

PIRTEK POLL: Who will win the 2013 Dunlop Series? 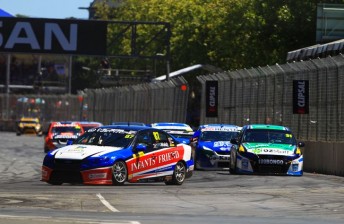 The battle for the 2013 Dunlop Series title has been blown wide-open heading into the second round at Barbagallo this weekend following the departure of early favourite Chaz Mostert.

Mostert has graduated to the V8 Supercars Championship with Dick Johnson Racing, leaving opening round runner-up Ashley Walsh as the effective points leader.

Walsh was the best of the rest in Adelaide, where the 25-year-old began his third season in the class by taking a maiden win in Race 1.

Armed with an ex-Stone Brothers Racing Ford and a Matt Stone Racing engineering group that includes Jim Stone and Paul Ceprnich, Walsh is looking every bit a title threat.

Another in ex-Ford Performance Racing equipment, Kristian Lindbom (Evans Motorsport), was arguably the star performer of the first round as he took fourth in just his second ever Dunlop Series start.

All in ex-2012 V8 Supercars Championship equipment, each can be expected to figure prominently throughout the season.

Red Bull-Pirtek Triple Eight Holden driver Casey Stoner stole much of the limelight in Adelaide, but sits just 23rd in points thanks to a lock-up induced tyre failure and crash in Race 1.

The former MotoGP World Champion is expected to be in the top 10 fight on pure pace in Perth, but a title tilt may be a big ask.

The Barbagallo round will see the return of Jack Perkins to the series, while MW Motorsport is yet to confirm a replacement for Mostert.

Those that missed Adelaide will start their campaign 279 points behind Walsh, but shouldn’t be ruled out. This week’s Pirtek Poll asks: Who will win the 2013 Dunlop Series? Vote now!