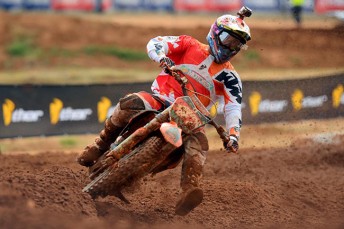 KTM racer, Todd Waters has taken out his second consecutive Monster Energy MX Nationals round with victory at Murray Bridge (SA) winning the second moto after a small crash in the opening race stoush.

The 22-year-old swept to five Championship bonus points after taking the GoPro SuperPole award and was online to dominate the opening race of the day before taking a small tumble. Getting back on the bike, he was able to overcome a stall to finish in third in that race.

No such trouble in the second race, taking a dominant win – his third moto win of the year.

He leads the Championship over Yamaha racer, Billy Mackenzie by 39 points.

“The Superpole was the decider today, so I’m thankful I was able to get that,” said Waters. “The first moto was interesting, I made a few mistakes, maybe got a bit cocky, which brought me back down and got me realising I needed to ride my own race.”

Mackenzie finished second overall – just two points behind Waters. The implementation of the Championship points and SuperPole format proved to be the difference between the pair. The Scotsman, who moved to CDR Yamaha this year, finished both MX1 races in second position.

Jake Moss took the first race of the day for Campbell Mining Suzuki and ended up completing the overall podium for the weekend.

Mackenzie’s CDR Yamaha team-mate, Lawson Bopping edged himself into the top three in the Championship after his fourth placed finish overall.

Four times Champion, Jay Marmont went out of proceedings on the opening lap after a collision with his Monster Kawasaki team-mate Adam Monea. In the process of the crash, Marmont suffered a leg and back strain and will have plenty of work to do to be fit for the next round.

In MX2, Yamaha racer, Luke Clout shot to victory with a calculating day’s racing. Taking his first moto win in the first race, he backed that up with a solid second placing in the second race of the day.

Winner of the second moto was Clout’s Serco Yamaha team-mate Luke Styke. He extended his Championship lead after earlier in the day finishing third after a light crash.

The next round of the Monster Energy MX Nationals will be next weekend at Wonthaggi in Victoria.

Championship Positions (after Round 2):