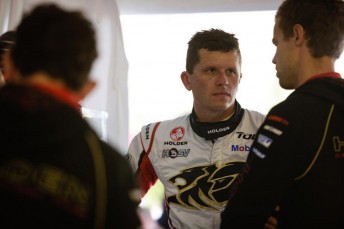 Tander made his debut with Garry Rogers Motorsport at Phillip Island in 1998 and has since started 449 races.

He has taken 50 race wins in that time, but is currently in the midst of a 47 race losing streak that stretches back to Bathurst, 2011.

The Barbagallo meeting is set to be an extra special one for the Tanders with Garth’s wife Leanne returning to racing in the Formula Ford class following the birth of the pair’s second child in February.

“To be honest, I didn’t realise it was my 200th start until the team mentioned it to me last week,” said Tander of his milestone. “It’s hard to believe it’s come up this fast – I can remember my first event at Phillip Island like it was yesterday.

“It’s an amazing coincidence that such a special occasion falls during my home event.

“It would be really great to celebrate it by winning some races in front of my family and friends, who have supported me from the very beginning.”

“The ’07 weekend was one of the absolute highlights of my career, right up there with winning Bathurst,” he continued, speaking of his clean sweep of the Barbagallo round in 2007.

“I know my way around Barbagallo better than any other circuit and I’d been trying to win there in V8s for almost 10 years, but it just never happened.

“To finally do it, and in the style we did was just awesome, something I’ll never forget.

“We were on pole at Barbagallo last year and we’re carrying momentum into the event after some solid form recently, so I’m confident of a good weekend.”

Tander currently sits fourth in the 2013 championship standings after nine races with best finishes of second in Race 4 at Symmons Plains and Race 9 at Pukekohe.

The team is expected to bring key front-suspension and engine upgrades to Barbagallo this weekend.

Tander and Dean Fiore will be the only West Australian drivers on the grid at Barbagallo this year, with Michael Patrizi and Karl Reindler having lost their full-time drives following the 2012 season.