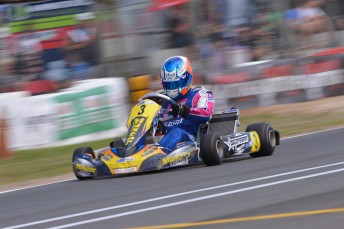 George Geranis was a surprise new winner in the CIK Stars of Karting Series (PICS: AFimages.com.au)

The battles for the Australian CIK Stars of Karting Series has taken a step up after the second round of competition at Adelaide’s Bolivar Raceway.

Unheralded Melbourne racer, Geranis had arguably the best weekend of his racing career in taking out both Pro Light Finals. He set the pole time and won a heat race. During both finals he was able to hold out multiple Australian Champion and fellow Kosmic chassis driver, Matthew Waters – who by virtue of his second placed finishes in all four finals held in 2013 has a five point advantage over Geranis in Championship standings.

In the main final of the day, the pair crossed the line less than a 10th of a second apart. Finishing third was another Victorian in Jordan Nicolaou. Fourth place and winner of the inaugural adidas Motorsport All Star Award was Lachlan Gibbons.

The Juniors battle has intensified after a tense opening final in Adelaide. Round one winner, Liam McLellan and West Aussie debutante, Kurt Kostecki had a tough fight which took a step forward still many laps from the chequered flag. The pair bumped each other on several occasions, at one point McLellan driving straight across a chicane.

Entering the battle was Northern Territory racer Bryce Fullwood in his first ever CIK Stars of Karting, presented by Castrol EDGE event. If it had’ve gone pear shaped for the other two, Fullwood could have won on debut, however Kostecki was able to settle it down and take the first final win.

In the second final, Fullwood pulled to the lead at one point, however McLellan – who won the opening round – quickly set about getting himself to the front and taking a dominant win in his Praga kart and extending his lead in the Championship.

New South Wales PCR driver, James Abela crossed the line second whilst the other Kostecki brother, Jake took his Tony Kart to third placing. Fullwood came in fourth and was presented with the BlackBerry Powerful award for his performance.

Dutch driver Joey Hanssen asserted his power in the Pro Gearbox category taking a pair of solid wins aboard his factory Lenzokart. After sharing the spoils with Queenslander Chris Hays at the opening round, the battle between the two looked to continue in Adelaide. After a DNF in the opening heat Saturday, Hanssen struck back showing his true class and wasn’t headed from there.

Hays came home second in the first final, whilst in the main race of the day PatriziCorse Birel driver, Kyle Ensbey made the best of his second row start after a litany of engine problems to split the two Championship combatants. Hays maintains the Championship lead however by 12 points at the end of the weekend.

In the support categories, Queenslander Brendan Nelson was awarded the SA State Title in the Dunlop KartSport TaG Heavy category in arguably the most entertaining race of the weekend. He, South Aussie Paul Pittam, Sydney 16-year-old Michael Saller, William Yarwood and local, Danny Errigo took the race to the wire, with Nelson getting a narrow win over Saller.

The next round of the 2013 CIK Stars of Karting Championship presented by Castrol EDGE will be in Geelong over the weekend of June 15-16.

Championship Pointscores (after Round 2 of 5):