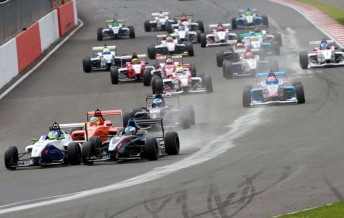 The Formula 4 field at Silverstone

Webber attended the first round of the weekend’s BRDC Formula 4 Championship at Silverstone last weekend, where his BRDC role saw him hand out the trophies.

The reborn Formula 4 class is being touted as a bridge between karts and Formula 3.

A global FIA Formula 4 series is expected to kick-off next year, in which multiple chassis manufacturers are being welcomed.

The chassis will be carbon fibre, while a 1.6 litre control engine package is currently being sought. 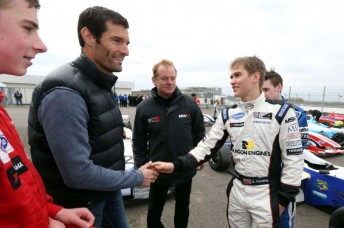 Webber in the Formula 4 paddock

The British championship is being run by Jonathon Palmer’s MotorSport Vision concern, which has previously pushed the likes of the now defunct Formula Palmer Audi and FIA Formula 2 Championships.

“I’ve always been a fan of Formula Ford, but you’ve got to look at costs these days.

“It’s really important for drivers to get a chance in cars, not just karts. I think F4 will go from strength to strength.”

France currently hosts its own Formula 4 class, which evolved out of the Formula Campus by Renault.