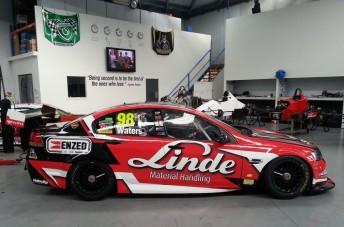 Long-time backer of Cameron Waters, Linde Material Handling, will take on the role of naming rights sponsor of the 18-year-old’s Minda Motorsport Holden for the remainder of the 2013 Dunlop Series.

Linde branding featured prominently on Waters’ Formula Fords and the Kelly Racing Holden he campaigned in the early round of last year’s Dunlop Series.

The Waters family business, Mildura Hydraulics and Forklifts, is Linde’s regional distributor for the Mildura area.

Wilson Security retains its spot on the bonnet of the #98 entry.

Waters sits 10th in the series standings heading into this weekend’s second round at Barbagallo having taken 10th and eighth place finishes from the two Adelaide races.

“I’m very proud and appreciative of Linde’s support so far and I’m excited about what we can achieve together this season,” said Waters.

“We had a solid start to the year at Adelaide and I’m really enjoying working with Minda Motorsport.

“We have great equipment at our disposal, so I definitely believe we can put all the ingredients together and build on our top 10 in the championship.”

The second Minda Motorsport Holden of Sam Walter will also sport a revised look this weekend thanks to new naming rights sponsor Blackchrome.

Waters and Walter were both part of a 14 car Dunlop Series test at Winton Motor Raceway last week in preparation for Barbagallo.