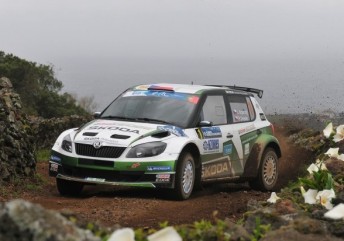 Jan Kopecký has continued his impressive start to the European Rally Championship by making it three wins out of four events with his first gravel victory on the Rallye Açores in Portugal.

Driving a ŠKODA Motorsport Fabia Super 2000 Kopecký won a total of seven stages in the event, which was plagued by poor weather.

The result means that the Czech driver increases his lead of the ERC standings to 27 points heading to round five in Corsica next month.

“I’m very happy because my last gravel rally was two years ago and this is my first win on gravel so thanks to ŠKODA and to everyone in the team for doing a great job,” said Kopecký.

“I was not thinking about the corner where I crashed but when I passed that corner I said ‘okay, it’s over’ and then we went wide on the next corner so I thought it was better not to think about these things again. It’s been a good start to the season and now we need to prepare for Corsica.”

Craig Breen extended his run of podiums to three events with a fine second place in a Peugeot Rally Academy 207 S2000 as local hero Ricardo Moura bagged the final podium place on his debut in a Fabia S2000 after a close scrap with fellow Portuguese Bruno Magalhães and Bernardo Sousa.

Formula One race winner Robert Kubica hit back after his roll over on Friday in his Citroën DS3 RRC to win seven stages, but was placed sixth overall at the finish.

VIDEO: Watch on-board of the winning Skoda in action