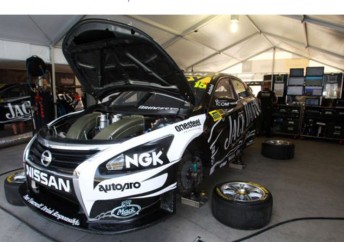 As Erebus Motorsport prepares to debut a major engine upgrade in its Mercedes-Benz entries at Barbagallo, fellow V8 Supercar newcomers Nissan Motorsport are braced for more short term pain as its own hunt for grunt continues.

The Nissan team’s four Altimas have run strongly in the mid-field at recent events despite continuing to occupy the bottom positions on the power-dependent sector time sheets and speed traps.

While the Erebus engine package is being refined in Germany under the team’s customer deal with AMG, Nissan Motorsport’s Melbourne-based engine department is balancing the need to service its current racing activities with undertaking further research and development.

Nissan’s Tokyo-based performance arm, Nismo, recently sent the Australian operation a range of items that it previously developed for its own GT racing version of the VK56DE motor, including a cylinder head, manifold and exhaust system.

The parts have been sent following the visit of two Nismo engineers to the Australian Grand Prix meeting in March, but none, says team owner/driver Todd Kelly, are quick bolt-on fixes.

“Most of it physically won’t fit in the car so it’s more of a learning process for us to find out the things that do and don’t work and then try to implement them on our engine,” explained Kelly, adding that there’ll be no significant changes to his engines for Perth. 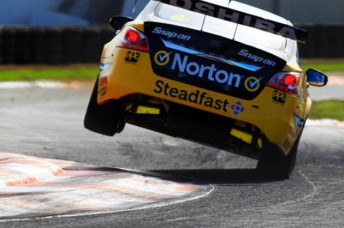 The Altima’s speed in the corners has impressed

“Once we exhaust trying all of those things, that will hopefully give us a bit of direction and a whole lot of knowledge to carry on with it.

“There’s certainly no team of people that are focussed on our engine over there (Japan), but there is plenty of dialogue, almost daily, on them helping us trying to find the answers and develop it.”

Although Kelly says he’s happy with the driveability, economy and reliability improvements that his squad have made since the start of the season, the question of whether or not the engine can be developed to the point where it produces the same power across its rev range as the existing Ford and Holden motors lingers.

“That is probably the biggest question on my mind every day with the (current) gap (to the opposition) with the engine,” he said.

“Is it physically capable of reaching (the opposition) and how long is it going to take us to get there?

“We’ve got two or three different R&D programs happening at the moment with different things in the engine and we really need to go through that process before we can do too much about trying to work out a situation to get the parity with V8 Supercars.

“I would like to think we could do most of that testing pre-enduros and have a good idea (by that point) whether this engine is physically capable of getting to where the other engines in the category are.

“For me, even though there’s a big chunk we need to find, given that it is only our first attempt at this engine and that there’s probably 20 ideas that we’d like to try, that tells me that we should go close. But unfortunately only time and a whole lot of testing will tell (if we can get there).”

With Rick Kelly having taken his Altima to a best finish of seventh at Pukekohe, Todd Kelly says that the way the rest of his team’s package – which this year includes Triple Eight-designed front-end components – is performing is highly encouraging.

“I think when we do get the engine where we need it to be we’ll certainly be an extremely strong package and certainly one that should be capable of podiums,” he said.