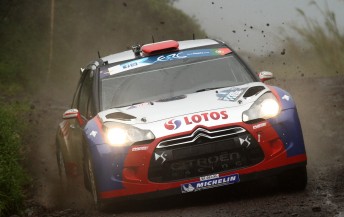 Former F1 driver Robert Kubica has stormed through the rain to head the latest round of the European Rally Championship, the Rallye Açores in Portugal.

“It was a very demanding day because the grip level has been changing a lot and I don’t have the experience,” said Kubica.

“It’s not easy when you have mud, rain and dry conditions. Tomorrow is much longer and very tricky but we have to try to learn.”

Heavy overnight rain resulted in significant damage to the roads. The opening stage was cancelled with the second test shortened, leaving just two super special stages at the end of the day. With the revised stage length of leg one falling to less than 10 per cent of the total competitive distance, legs one and two were merged, which meant that the start order selected by the priority drivers for Thursday’s stages will apply to Friday’s route as well.

Keeping her head above water was Australia’s Molly Taylor who sits sixth in the two-wheel-drive category and the leading female driver in the event.

“I took it stead and got into the groove,” said Taylor.

“The conditions were slippery but better than expected.”