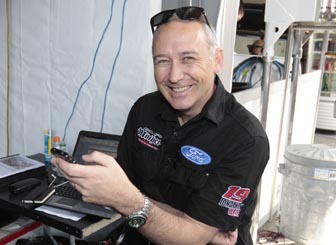 The departures at V8 Supercars continue with confirmation late today that the organisation’s Commercial and Marketing manager John Dunlop will be moving on early next month.

As mentioned by Speedcafe last Friday that Dunlop would be finishing up, his termination was communicated to the managers of the V8SC category late this afternoon.

It is the second time in a week that a major announcement has occurred near enough to close-of-business at 5pm on Friday.

According to Speedcafe’s information, Dunlop will stay with the company until just before the series makes the historic move to race in the United States at the Austin, Texas round, from May 17-19.

Dunlop was appointed early last year to what was a newly created role of Director, Commercial and Marketing after moving from his previous position as the Commercial manager at Tekno Autosports.

The latest departure comes as V8 Supercars finds itself facing a difficult period with its leadership team as changes to management continue at the top of the organisation.

In a short statement late last Friday, V8 Supercars confirmed that David Malone would be vacating the position as chief executive, continuing a trend of short-serving chief executives since Wayne Cattach retired in 2008.