Winterbottom and Whincup keen to move on from stoush

Winterbottom and Whincup keen to move on from stoush 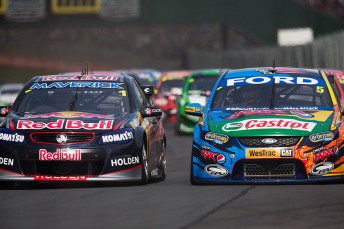 Jamie Whincup and Mark Winterbottom squared off at Pukekohe

Ford and Holden adversaries Mark Winterbottom and Jamie Whincup are both hoping to leave their destructive Pukekohe stoush behind them when the V8 Supercars Championship resumes at Barbagallo in a little over a week’s time.

Collisions between the two drivers in Races 7 and 8 of the championship in New Zealand triggered a flurry of press interest in their rivalry, which has stretched through karts, Formula Fords and now almost 10 years of V8 Supercars combat.

Both Pukekohe incidents occurred when the pair were fighting for the lead of the respective races.

The first saw Winterbottom spin while trying to pass Whincup, while the second saw Whincup bump-pass the Pepsi Max Ford – a move that earned the Red Bull Holden driver a 15 point penalty.

“Round three is purely up to Frosty,” said Whincup in a typically jovial-yet-provocative Red Bull statement on the current situation between the two drivers.

“If he wants to go toe-to-toe, I’m happy to. I’ll do that any day of the week without absolutely any dramas. “But for me, it’s all over. It’s completely his decision whether he wants to continue this so-called rivalry or whatever it is.

“But if he doesn’t and just wants to get on with the racing, then that is what I’m going to be doing.”

Winterbottom, meanwhile, told Speedcafe.com this week that Whincup needs to remember that there are 26 other cars in the field.

“He seems pretty focussed on us at the moment but there are more people than just him that I’m focussed on,” he said.

“You want to win races but in his opinion I’m out to get him.

“There was a big difference between the way we both attacked each other.”

Although continuing to disagree with Winterbottom’s view of the two incidents, Whincup says the talk of a feud between the two drivers is “a hype-up for the press”. 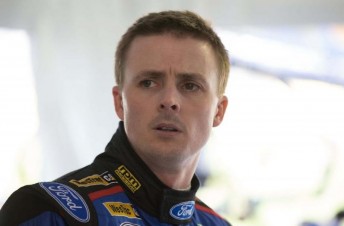 “It’s all good fun I reckon and it’s good for the sport. Everyone’s saying it’s this big rivalry but it’s not quite like that,” he said.

“He did a dumb move in one of the races in New Zealand and we can’t have people getting around doing that.

“So of course, you’ve got to retaliate in the next one… it’s not my style but it’s what has to be done sometimes unfortunately.”

Winterbottom denied that he had been driving particularly aggressively at Pukekohe after copping criticism for losing the Race 5 win to Fabian Coulthard in the closing stages the previous weekend.

“When you’re four tenths a lap quicker than anyone you don’t want to sit behind them. I was just trying to use the speed I had,” he said of his driving in New Zealand.

“If you’re not quick enough you can’t be forceful. It’s just one of those things. You’ve got to use it while you’ve got it.

“I’m sure there’ll be other races where it’s strong and I’ll try and use it (the car), as well as other times when it’s struggling a little bit and you’ve got to survive.

The incidents with Whincup coupled with two tyre issues saw Winterbottom fall to 11th in the points standings after Pukekohe, a full 249 points behind his title leading team-mate Will Davison.

Although still optimistic of challenging for the title, Winterbottom admits that he can afford no more set-backs if he wants to stay in the hunt.

“If we get a bit of luck, start finishing races and use the speed we’ve got then we’ll start clawing it back,” he said of the deficit.

“Other people are going to have dramas as well, but I can’t have anymore. If I get set back again it’ll hurt too much, whereas everyone has it in their hand that they can have a bad round and still be within 50 or 100 points of the championship. I don’t have that luxury.

“But one DNF at Sandown or Bathurst, a gearbox failure there costs you 300 points. Reliability is not 100 percent for any car, especially over 1000km.”