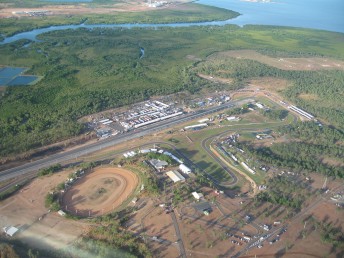 The Hidden Valley complex in Darwin

The Northern Territory’s burgeoning growth in motor racing is raising hope that Darwin’s Hidden Valley circuit could be in the running to revive the Triple Challenge format of disciplines.

The Triple Challenge, which had healthy backing from a cigarette company, was a 1990’s-spec scheme which gave punters the chance to see touring cars, drag racing and Superbikes on the one program at Eastern Creek.

With the Northern Territory Government’s backing of June’s Supercharge Batteries drag racing Desert Nationals in Alice Springs, there are rumblings that the old Triple Challenge format may be revived. Ironically the name by which the V8 Supercars round goes by is called the SkyCity Triple Crown.

The Major Events division of the NT Government will bring television coverage to the Alice Springs event.

The attendance of drag racing legend Victor Bray at Darwin’s V8 Supercars event at Hidden Valley from June 14-16 has also sparked interest among both ANDRA and NT Major Events about the potential of establishing a Triple Challenge event.

“With a world class drag strip running parallel (to the Hidden Valley circuit racing track) – you never know, one day we might be able to see Top Doorslammers – those owned by Victor and Ben (Bray) running simultaneously to the V8 Supercars, wouldn’t that be something!” Paul Cattermole, General Manager of the Northern Territory Major Events Corporation said in announcing Bray’s attendance recently at Hidden Valley.

The idea has tacit support from the ANDRA boss Malcolm Bulley, who prior to his current role, led the upgrade program at Perth’s Barbagallo Raceway.

“Everybody has great memories of the Triple Challenge events that used to be held at Eastern Creek, where V8 Supercars (Touring Cars) and Superbikes would run during the day followed by the spectacle of drag racing at night,” Bulley told Speedcafe.com.

“We’re bringing our first ever ANDRA Drag Racing Series championship round to Hidden Valley in August (16-17) as a stand-alone event, but those comments are food for thought in terms of an event that would be unique to the Northern Territory and a massive attraction for spectators and teams.”

This development is showing dividends with current Australian Sprintcar Champion, James McFadden originally hailing from the Territory and the Top End having its first ever Australian karting Champion in Bryce Fullwood being crowned in Adelaide last month.

Hidden Valley’s international level speedway and kart racing facility lie next door to the track that hosts V8 Supercars and that track has the drag strip built alongside the main straightaway.

The Supercharge Batteries Desert Nationals features the Aeroflow Sportsman Series and will be conducted at Alice Springs June 28-29.