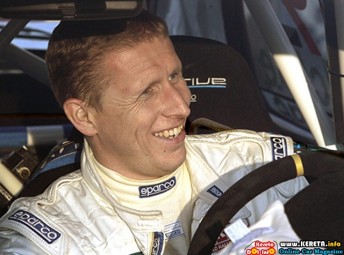 Alister McRae will race for KTM at the Safari

International rally champion Alister McRae, has signed a deal with KTM for this year’s Australasian Safari which will see his first major competition on two wheels.

The Perth-based Scotsman is eager to start familiarising himself with the KTM 500 EXC in preparation for September, when he enters the MOTO category of Asia Pacific’s toughest off-road race.

Dirt bikes are not totally new to McRae, as both he and his late brother and 1995 World Rally Champion, Colin, raced motocross as juniors. Since that time he has raced exclusively in rally cars, including works drives for Mitsubishi and Hyundai in the WRC and Asia Pacific Rally Championship.

“Many people don’t know this but my first foray into motor sport was at 12 in motorcycle trials and motocross; bikes have changed a bit since then,” said McRae.

“After 20 years of professional driving, I am really excited and slightly nervous to be riding a KTM in this year’s Australasian Safari.

“Jeff Leisk and the team at KTM have provided a KTM 500 EXC, which is now being prepared so I can get some training miles under my belt before Safari.”

Leisk, General Manager of KTM Australia, said that he is pleased to have McRae on board for this year’s Safari.

“The combination of Alister, who has many rally championship wins under his belt, and a bike well suited to the tough terrain of Safari like the KTM 500 EXC, will make them a force in the MOTO category,” said Leisk.

The Australasian Safari will run from 20-27 September in the Western Australian outback.