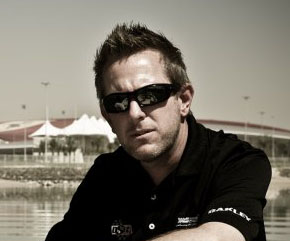 Two times NHRA Top Fuel final round winner, Tommy Johnson Jnr will fly to Australia next week to be part of the Rapisarda Autosport International team at Sydney Dragway for the Nitro Champs from May 3-5.

Johnson Jnr, who last weekend was the ‘roving analyst’ for ESPN’s coverage of the 4-Wide Nationals at zMAX Dragway in Charlotte, arrives into Australia to pilot the machine that Larry Dixon blasted to a 4.50s pass at Willowbank Raceway to establish a new Australian record.

Whilst TJ has spent time in Top Fuel, he is probably best known for his exploits in Funny Car where he has seven final round NHRA victories to his credit. All in all, he has appeared in 22 NHRA Nitro final rounds.

He has driven for some of the legends of the sport including being the only driver outside the Bernstein family to drive for Kenny Bernstein Racing and raced for Don Schumacher Racing in 2009. He still retains a relationship with DSR – which was heavily aligned with Rapisarda Autosport in its formative days in the US. Johnson also holds the honour of being the first driver to perform at Top Fuel pass at the Yas Marina circuit.

Legendary tuner, Lee Beard will accompany Johnson to Sydney Dragway given Dixon has commitments in the US. Beard’s influence over the team no more evident than at Willowbank when Dixon turned around from the dramatic axle failure in his first run to record the fastest quarter mile times in Australian history and some of the fastest ever seen worldwide.

In further good news for the Rapisarda team, their shoestring Mello Yello NHRA Drag Racing Series 2013 budget has been boosted for this weekend’s event at Royal Purple Raceway in Houston with the signing of a new sponsor in Escopeda Oil and Gas Development. At this stage, it is a one-off partnership. Rapisarda committed for 12 to 16 races and has left the remaining races to Dixon and Beard to fund should they be able to secure the appropriate sponsorship.

Utilising some older equipment, Dixon was able to run his best time last weekend at zMAX and was able to advance past the opening round eliminations at the expense of Australian racer Dave Grubnic, however bowed out in round number two.

Johnson Jnr. is yet another stellar American addition to the 2013 Nitro Champs which will be held at Sydney Dragway next weekend, May 3-5.