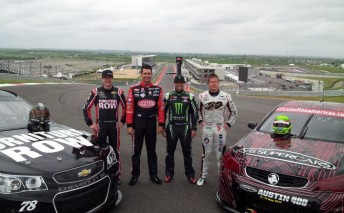 James Courtney has taken the wheel of Kurt Busch’s NASCAR Sprint Cup Chevrolet SS at the Circuit Of The Americas in Austin.

Completing the swap, Busch drove the Holden Commodore Car Of The Future prototype which has been in Texas for the past month to help promote the V8 Supercar race event in May.

“It’s been awesome taking plenty of media and guests for rides and really building the excitement,” said Coulthard on Seven’s Sunrise. 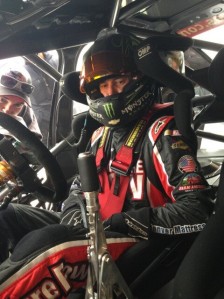 “I’m getting in some cheeky laps which is good for me and Lockwood Racing.

“The track itself is like noting else we go to. It’s got high speed – low speed – it’s like a driver’s dream.

“We did some events around the MotoGP and the locals know we are coming and know the dates like the back of their hand. I can’t wait to come back in May.”

Over the weekend of the MotoGP in Austin, Courtney drove demonstration laps of the Commodore before being joined by Coulthard for media and corporate rides this week.

It was not only Busch’s first experience in a V8 Supercar, it was also the first time that the 2004 NASCAR Sprint Cup Champion had driven the Circuit Of The Americas.

“What a great day and great opportunity,” said Busch via Twitter.

“Thanks guys for an opportunity of a lifetime!” 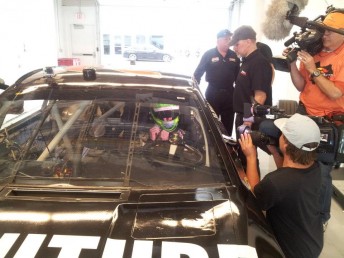 Speaking on Seven’s Sunrise this morning Courtney was still beaming after sharing cars and the track with Busch.

“I was in the NASCAR and Kurt Busch drove the V8 and it was an awesome opportunity to go around with those guys,” said Courtney.

“Being here for the MotoGP has been fantastic and everyone involved has done a great job in building the excitement ahead of the V8 Supercars racing in Austin.

“The circuit here is amazing with plenty of undulations and there’s some awesome passing opportunities.

“Add all the cars and 400 Australians in the series and the people here will go crazy for it.”