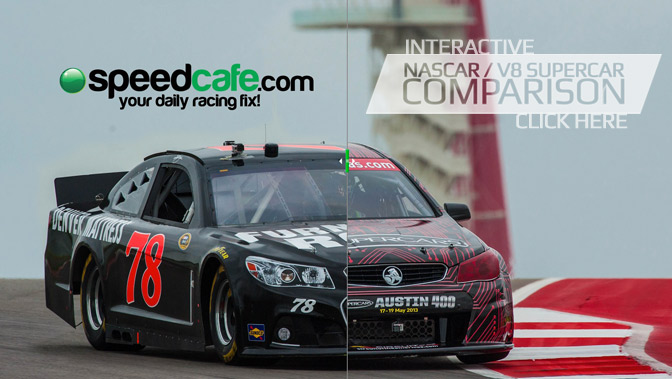 If you’ve ever wondered about the difference between the dimensions of a V8 Supercar compared to a NASCAR this interactive slider gives a graphic description of how dissimilar the two are.

While the NASCAR has taken its Chevrolet body styling based on the Holden VF Commodore the two are strikingly different proportionally.

In essence the NASCAR is a more highly modified version of road-going donor car given that it has no doors, has more pronounced flanks and a different rear three-quarter glass and body area.

The American stock car has an overall more chunky, fatter look and is considerably longer than the V8 Supercar.

Kurt Busch’s Chevrolet SS Sprint Cup car arrived at the Circuit Of The Americas circuit in Austin where a customised V8 Supercar is also garaged.

The two machines were part of a promotional media event this week where James Courtney and Fabian Coulthard flew to the Texas track where V8 Supercars will race from May 17-19.