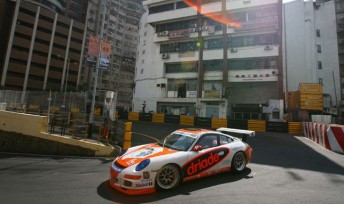 The famous Melco hairpin on the 6.2km Macau circuit

Up to six Carrera Cup Australia drivers could race on the famed streets of Macau against competitors from the Asian and Japanese Porsche championships this November.

The move is the latest attempt to integrate Australian competitors into the Asian region after a mooted tie-up between the Australian and Singapore Grand Prix support events earlier this year failed to materialise.

The Macau race is a non-championship hit-out for the Carrera Cup Asia field and will take place a week prior to the 60th anniversary Macau Grand Prix.

Up to six Carrera Cup Japan contenders have also been offered a place on the grid for the November 8-10 meeting.

Several of Australia’s amateur ‘Elite Class’ competitors are understood to have expressed an interest in making the journey, although work-in-progress freight costings mean that none have committed as yet.

“We’re currently gauging the level of interest with our competitors and sorting through the details of exact costings for them,” Porsche Cars Australia motorsport manager Jamey Blaikie told Speedcafe.com.

“The timing of our final round on the Gold Coast (October 25-27) means that any cars heading over would have to be air freighted to Hong Kong and then shipped to Macau from there, which isn’t ideal.

“But we’d certainly liked to be represented at the event. Macau is obviously a phenomenal race track and it’s also a place with a great atmosphere, so we’re pleased to be able to offer our guys the opportunity to go over.”

The Carrera Cup cars will receive just 90 minutes of track time across the weekend, split evenly between a single practice session, qualifying and a race.

Blaikie meanwhile confirmed that the mooted appearance of factory Porsche drivers at the upcoming Rennsport round of the Carrera Cup Australia will not occur due to clashing commitments.

“There was some very strong interest from the factory and several of the drivers but the scheduling just hasn’t worked out unfortunately,” he said.