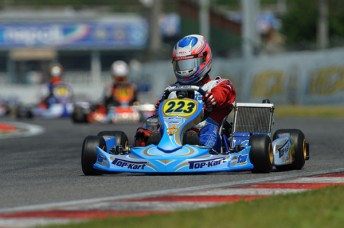 Joseph Mawson leading the way during the action at Sarno, Italy on Sunday (Pic: KSP)

Australian kart racer Joseph Mawson became the first Australian to win a heat race in WSK competition during Round Three of the WSK Euro Series at the Sarno circuit in Italy.

Competing at the event with the Top Kart Racing Team, Mawson qualified 16th fastest from the 62-drivers in the KF category on Friday, before a mechanical failure ended his run in the opening heat race.

The Australian Motor Sport Foundation-backed driver then fought back to record a sixth and 11th placing in his remaining two heats, ensuring he was still in with an opportunity to make it into the 34-kart field for the finals.  Only a good result in his final heat race would secure his spot on the grid, as he was languishing at 31st position in the standings.

Showing true determination, Mawson steered his kart from his seventh starting position towards the front of the field in the early laps, before taking over the race lead on the penultimate lap. He would go on to cross the line first to ensure he transferred into the final phase of the event for the third consecutive time since moving to Italy at the start of 2013. Mawson’s heat race win was the first by an Australian in any WSK Series event.

A strong performance in the pre-final saw Mawson move his Top Kart up the order from 18th to 12th place at the finish. As a result, he started the main event from 12th position.

Mawson was involved in a minor scuffle as karts speared in all directions on the opening lap of the final. He then fought back to be running in 12th place by mid race distance, several laps later Mawson came across Felice Tiene’s stricken kart that had stopped sideways on the exit of a corner and he was unable to avoid contact.  The impact of the collision caused significant damage to Mawson’s machinery and he was forced to retire from the event.

“It was great to get a win on the board in the final heat race but on the other end of the scale, it was disappointing that I wasn’t able to transfer it into an overall result,” said Mawson.

“I really felt that a top ten was a reality and top five was a possibility if things went my way. I showed the best speed that I have since the start of the year and mixed it with guys who have won the KF European and World Championships across the weekend, so that felt pretty good.

“This is the third time that I’ve qualified for the finals and had a DNF. They say that things come in threes, so hopefully that is my third and final for the year.

“I know that we accomplished a lot this weekend and improved yet again. I’d like to really thank my mechanic Ben George for all of his assistance, along with the Australian Motor Sport Foundation, R360, Top Kart, GKS Lemmens Power, and all the Aussies back home who stayed up to follow my weekend!”