Mostert and Winterbottom to test DJR Ford at Morgan Park

Mostert and Winterbottom to test DJR Ford at Morgan Park Chaz Mostert will have his first taste of a Dick Johnson Racing Ford today at Morgan Park, where he’ll be joined by Ford Performance Racing star Mark Winterbottom.

Winterbottom will drive 10 laps in the car at Morgan Park, the maximum allowable under the Rookie Test rules, in addition to guiding Mostert throughout the day.

The closed test is taking place at the 3km Warwick, Queensland, circuit due to the lack of available track time at the squad’s regular testing venue, Queensland Raceway, prior to the upcoming Barbagallo round.

“It’s important that we get Chaz some time in the car prior to Barbagallo,” DJR team manager Richard Swan told Speedcafe.com. 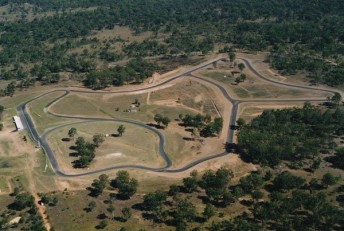 The Morgan Park layout from the air

“Having Mark there will provide a good gauge for us to see where the cars are at as well as where Chaz is at, and point to what we need to improve.

“It’s going to be a big day for Chaz and a good hit-out for the whole team as well.”

Mostert will be engineered by the FPR-employed Adam De Borre under the new arrangement between the two Ford teams.

The latest developments have not changed the technical make-up of the DJR cars, which will continue to run engines sourced from Roger Higgins’ InnoV8 firm.

DJR’s #17 entry of Tim Blanchard currently sits 23rd in the points standings after nine races with a best finish of 15th.