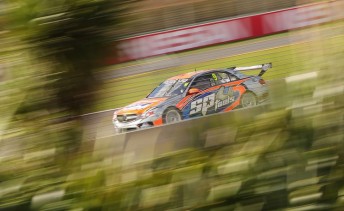 The day, which is also being attended by Dick Johnson Racing and its rookie Chaz Mostert, is the first of two Rookie Tests allocated to the 27-year-old German under the first-year driver rules.

All three Erebus Mercedes entries will run the new-spec engine during the fourth event of the 2013 championship at Barbagallo, Perth, in less than two weeks time.

As previously reported, the engine upgrades see the AMG V8 move from a two to an eight butterfly inlet manifold following the extensive heat-related issues experienced with the marque’s standard system.

That change has seen V8 Supercars insist that Erebus moves from its electronic throttle to a cable, bringing it into line with the remainder of the field.

The alterations have been developed by HWA in Germany and fitted to the team’s existing engines in Erebus’ Queensland workshop. 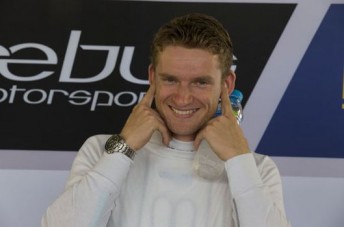 Dyno testing began last Thursday, with today’s track hit-out focusing on the mapping and driveability of the new package.

Although the upgrades are expected to yield considerable gains, team manager David Stuart says it’s impossible to predict where the squad will be in the field at Barbagallo.

“The best thing that we can do is go through the test day and analyse what we have,” he told Speedcafe.com when asked of the expected improvement in competitiveness.

“We should have improved driveability through all aspects of the corner – entry, mid-corner and exit – and given that, we should be able to make some more chassis adjustments too.

“It (the engine upgrade) should improve our performance, but as to where we’ll be come qualifying on Saturday at Barbagallo, it’s very hard to say.”

The team’s best qualifying and race results are both 13th place efforts achieved by Lee Holdsworth, who sits 19th in the points standings after Pukekohe.

Engel is currently 26th in the championship with a best finish of 20th, but Stuart says he’s been impressed with how the former Mercedes DTM driver has fitted into the squad.

“If you look at his times compared to Lee and Tim, and that’s really the only way you can assess him, he’s doing a good job,” he said.

“It’s always difficult, as we saw with Alex Premat last year, for drivers coming into this championship.

“Alex’s qualifying speed this year has been very good, but it’s his second visit to the tracks.

“I think overall I’ve been pleasantly surprised as to how Maro has not only fitted into the team, but adapted to the cars and the circuits.

“When you look at the tracks he’s been to so far, particularly Symmons Plains and Pukekohe, they’re hardly your typical European race circuits.”

Holdsworth is in attendance at today’s test and will complete the maximum allowable 10 laps in the car.

Today’s running is taking place at the 3km Warwick, Queensland, circuit due to the lack of available track time at Erebus’ regular test track, Queensland Raceway, prior to Barbagallo round.