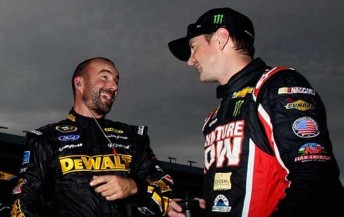 NASCAR star Kurt Busch has taken advice from Australia’s own Sprint Cup campaigner, Marcos Ambrose, ahead of his V8 Supercars laps at the Circuit of the Americas.

Busch will drive the V8 Supercars Car of the Future prototype around the Texas venue tonight (Australian time) in order to promote the upcoming Austin 400.

Busch was first contacted about testing the car just one week ago by countryman Boris Said, who is a former Paul Morris Motorsport endurance V8 Supercars co-driver.

The 34-year-old Busch says that Ambrose, who won two V8 Supercars titles before heading to the USA, was his first point of contact from there.

“The way you do it in the NASCAR garage is you call Marcos Ambrose,” Busch told SpeedTV of preparing for the test laps. Busch’s Sprint Cup Car arrived at the COTA on Monday

“And so I got his number right away and talked to him about it. As I’m talking to him, I’m pulling up information on the internet about the specs on the cars.

“Even the (V8 Supercars) guy, (director of sanctioned business ) Adam (Firth), he’s joking around. He goes, ‘You know, the pedals are reversed, too?’

“And I’m sitting there scratching my head and I tell Marcos, ‘I think he’s messing with me.’ He goes, ‘Yeah, he must be a New Zealander.’”

Busch added that he also sought Ambrose’s advice on the task of helping Courtney and Coulthard adapt to the Sprint Cup vehicle.

“I asked Ambrose about that. ‘What’s going to be the first thing that’s foreign to them?,’ said Busch.

“And that is the very tall first gear — we only have four gears with our cars, as well as it’s an ‘H’ pattern.

“They know ‘H’ patterns, but they’re going to really have to slip the clutch and it’s going to be tough for them to get the car going. Once it’s going, Ambrose said they’ll take care of it.”

Busch added that he expects the V8 Supercar to be faster around the Austin venue than his NASCAR, despite giving away some 200bhp.