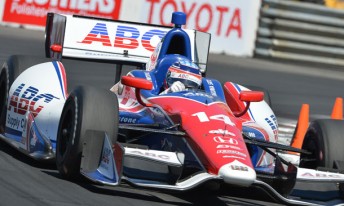 Takuma Sato has broken through for his first IndyCar win

Former Formula One driver Takuma Sato has become the first Japanese driver to win an IndyCar race with victory on the streets of Long Beach.

Starting fourth, Sato made the most of a strong start and good pit stops to take the lead after the first round of pit stops. In a race which featured a number of caution periods, Sato kept his head and scored the first win for A.J. Foyt Racing since 2002 (Airton Dare) at Kansas Speedway. The legendary Foyt who missed the race while resting at home in Texas ahead of surgery for sciatica.

Sato was guaranteed the victory when Tony Kanaan brought out a late race caution after he crashed into a tyre barrier. Graham Rahal crossed in second, while Justin Wilson climbed from 24th on the grid to finish third.

Scott Dixon had a tough race after starting from the rear the Kiwi was spun on the opening lap by Tristan Vautier. Dixon suffered a puncture and lost a lap coming to the pits for repairs, which included a punctured tyre.

Will Power found himself as high as second behind Sato, but then a poor middle stint of the race on the primary tyres put him back in the pack. Any chance he had of recovering to a strong finish was ended when he was struck by Vautier when leaving his pit box. Power was forced to come back around for more repairs and finished 16th.

His team-mates fared little better, with Helio Castroneves falling out of contention early after damaging his front wing, and A.J. Allmendinger retiring with a mechanical problem.

Points after 3 of 19 rounds