PIRTEK POLL: Who will win first, Nissan or Mercedes?

PIRTEK POLL: Who will win first, Nissan or Mercedes? 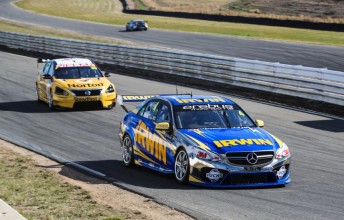 Nissan or Mercedes. Who will win first?

Nissan Motorsport and Erebus Motorsport have both enjoyed modest starts to their 2013 V8 Supercars Championship campaigns, but are working hard to move towards the front of the field.

With four V8 Supercars events in the record books in the new era the two marques are at the height of their development phases.

This imbalance comes at a time when Nissan has rejoined Australian touring car competition for the first time since the Group A rules were torn up 20 years ago while the Mercedes-Benz brand has arrived through the Erebus squad branded as E63 AMGs.

Of the two new brands it is Nissan who have shown considerable improvement recording some top 10 finishes through drivers Rick Kelly and James Moffat at the Pukekohe, New Zealand, round.

The Erebus Mercs have done it tougher however there are key upgrades to their engine package coming in two stages starting at the next round at Barbagallo, Perth, from May 3-5.

The development phase has been short and troublesome for the new manufacturers who face the massive task of trying to competitive on level terms with Holden and Ford in the new era of the sport.

With the nine championship races in the bag as well as four non-Championship heats (all won in Commodores) at the Australian Grand Prix meeting Speedcafe.com feels it is time gaze into the crystal ball.

Have your say on the poll below; Who will win first, Nissan or Mercedes?