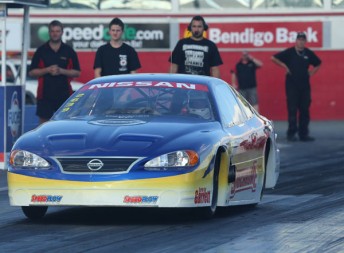 Ben Bray has set a new world record time for a four cylinder sedan with a blistering 6.807 second run at 325.72kph (202.39mph) in his Nissan Altima at Willowbank Raceway.

The run came in extremely hot conditions, not usually conducive to quick times, after earlier in the day setting a 6.86 second run.

“When we went down the track for the first time that day and set the 6.86 second pass at 202 miles per hour, that saw us just two tenths off the national record and things were looking good,” said Bray.

“When we next headed out on track at 2.30pm the temperatures were high, providing a less than ideal environment for record-breaking performances.

“Despite that though, we were able to hammer down the track with the 6.807 second pass at 202.39 miles per hour, snatching not just the Australian record from my mate Michael Baghdadi but also the world record for my car’s engine type.

“To say I was elated was an understatement. We had changed the gear ratios and the transmission after the Sydney Jamboree and were confident of a good showing, but this just smashed all of our expectations for the day and really made all the late nights worthwhile!

“Everyone here at Team Bray Racing including Benny have worked so hard to first crack that ‘six second’ marker and then to go after the record,” said Vloedmans.

“To achieve that at Willowbank Raceway at the weekend was just phenomenal, I don’t mind saying that I had a hard time containing myself over Ben’s two-way radio as he crossed the finish line – what a brilliant result!”

The Altima will sit out for a time now whilst Bray and his legendary father Victor take to more familiar surrounds of their Top Doorslammers for the Nitro Champs at Sydney Dragway over the weekend of May 3-5.