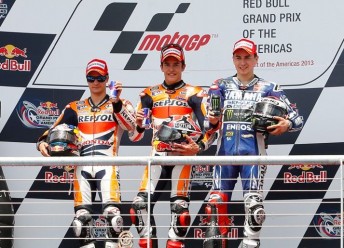 Màrquez flanked by Pedrosa and Lorenzo on an all-Spanish podium

Twenty-year-old Spaniard Marc Màrquez has become the youngest ever winner of a MotoGP race after fending off team-mate Dani Pedrosa in the Red Bull Grand Prix of the Americas.

In just his second ever weekend as a MotoGP rider, the Moto2 graduate had dominated from the outset, topping practice before becoming the youngest ever premier class pole-sitter.

Pedrosa was able to lead much of the race before Màrquez slipped by just after half distance.

The more experienced Spaniard stalked his younger rival for the remainder of the going, but lost valuable tenths just three laps from home, leaving the winning margin at a relatively comfortable 1.5s.

Màrquez now jointly leads the championship with Qatar winner Jorge Lorenzo, who was a further two seconds adrift of Pedrosa in third.

Valentino Rossi failed to muster the sort of form he showed in Qatar on his way to sixth ahead of Andrea Dovizioso, Alvaro Bautista, Nicky Hayden and Andrea Iannone.

As expected, Aleix Espargaro was too strong in the CRT ranks, finishing 11th outright.

Australian Bryan Starring was 20th and the last of the finishers on the lead lap.

The MotoGP World Championship will continue on May 5 at Jerez, Spain.