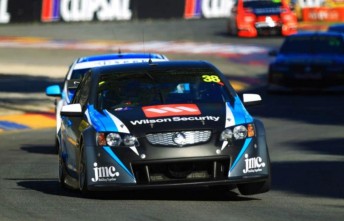 Jack Perkins will return to the Dunlop Series at Barbagallo next month, driving for an expanded Eggleston Motorsport outfit.

The car is currently at Tekno headquarters receiving a freshen up before being dispatched to Perth via Eggleston’s Melbourne workshop.

Perkins last competed full-time in the Dunlop Series in 2011, where he finished second overall in a Sonic Motor Racing Services Ford.

The 26-year-old says that returning to the class will provide the ideal preparation for his upcoming V8 Supercars Championship endurance campaign with Fujitsu GRM. “With the Fujitsu GRM boys doing so well this year I felt it was really important to get in some competitive racing miles before the enduros, but it needed to be in the best equipment available,” said Perkins, who relaunched the iconic Perkins Motorsport brand as an online store earlier this month.

“I can’t thank Ben (Eggleston) and Rachael (Wagg, team manager) from Eggleston Motorsport enough for giving me the opportunity to race the new car at Perth in a couple of weeks, and I’m looking forward to having a drive of it in practice.”

The car is currently without a major sponsor for Barbagallo, but will enjoy partial support from Perkins’ existing backers Adaps IT Recruitment and Griffith Corporation.

Eggleston Motorsport’s technical expertise has also been expanded since the opening round in Adelaide with the addition of former Stone Brothers Racing engineer Dan Kroehn.

Gaunt sits eighth in the Dunlop Series standings after the opening round, driving a sister ex-Triple Eight chassis to the one that will be campaigned by Perkins.

Fourteen of the Victorian-based Dunlop Series cars tested at Winton Motor Raceway today, while Perkins will have his first taste of his new steed in Practice 1 at Barbagallo on May 3.