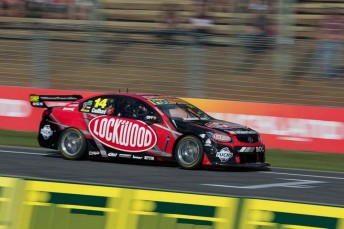 Brad Jones Racing has confirmed that endurance stalwart Luke Youlden has scored one of the most prized drives of the 2013 co-driver market, teaming with Fabian Coulthard.

The Lockwood Holden already has three championship race wins to its credit so far this season, with Coulthard sitting fifth in points after Pukekohe.

The 35-year-old helped primary drivers Will Davison and Van Gisbergen to pole position for the 2011 Phillip Island 500 and 2012 Sandown 500 respectively.

“I’ve obviously picked a fantastic time to join the team with their recent form,” said Youlden upon the confirmation of his drive.

“It seems to be a very a harmonious team. I had to really rely on Fabian’s word about that initially, as I’m obviously very new there, but from what I’ve seen so far he’s definitely right.

“That’s very important to me because I believe you need an environment where everyone works together to win a race like Bathurst. That’s a lesson I’ve learned from being involved with teams where you seem to win together but make mistakes as an individual. 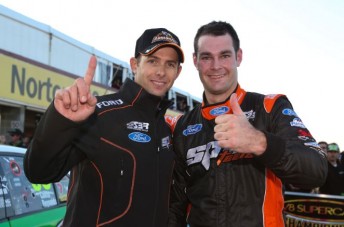 “I know Fabs pretty well; he was instrumental in getting me across to BJR. It would mean the world to me to win Bathurst and to do it with a mate like Fabian would be something extra special.

“It hasn’t happened for me yet, but I think I’ve got myself in the best position so far in my career to do it. Fabian is at the top of his game, the engineering team is at the top of their game and, by September, I’ll be doing my utmost to be on top of my game.

“Going into Sandown this year I’m the reigning co-driver race winner and have sat on pole position and led the first half of the 500km race for the last two years.

“I’m very much looking forward to getting a hat trick of pole positions with BJR this year and with the pace they’ve shown so far, we have a definite shot at it.”

Allan Simonsen was confirmed to co-drive alongside David Wall in BJR’s Wilson Security Racing entry on Friday, while Andrew Jones is expected to retain his place alongside Jason Bright.

The team had penciled in a test day this week, but has elected to focus on workshop based preparations ahead of the May 3-5 Barbagallo event.

Coulthard is currently in Austin, Texas, helping to promote the upcoming V8 Supercars sojourn to the Circuit of the Americas.