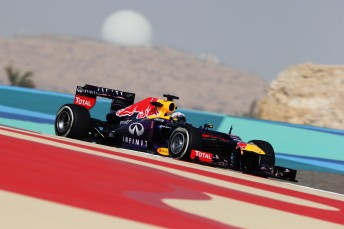 A typically aggressive Sebastian Vettel delivered one of his finest performances to win an electrifying Bahrain GP.

The three-times World Champion Vettel claimed his second win of the season as an absorbing contest unfolded behind.

The Red Bull driver’s perfect performance was only matched by the mega dices through the field that lasted for the 57-lap race distance.

Lotus filled second and third with Kimi Raikkonen and Romain Grosjean, who denied Paul di Resta a career defining first podium after passing the Force India driver with five laps remaining. It was a repeat of the podium at the Sakhir circuit in 2012.

In a furious opening to the race Vettel began aggressively grabbing the lead from Rosberg before the Mercedes driver took P1 straight back.

The fight between Vettel and poleman Nico Rosberg was one of several highlights from the opening few laps which delivered epic passing and thrilling wheel-to-wheel combat with the pitched battles breaking out throughout the top 10.

By lap three Rosberg was clearly struggling for pace with Vettel streaming into the lead.

Rosberg then fell into the clutches of Fernando Alonso but Rosberg immediately grabbed P2 back.

Alonso finally grabbed Rosberg for second by lap five, capitalising on the use of the DRS.

However Alonso was summoned to the pits three laps later with his DRS stuck open. The rear wing continued to malfunction, cruelly spelling an end to any chance the Spaniard had of fighting for a podium let alone victory.

Scotsman di Resta was squeezing decent speed out of the Force India flashing into third place inside the opening 10 laps before he inherited the lead when Vettel pitted for the first of his stops on lap 11.

Vettel took just four laps to regain command of the race from Raikkonen who was on a long run on his set of medium compound tyres and had yet to pit.

By lap 23 Webber streamed past Alonso for eighth position who was clearly fighting a Ferrari that had lost the speed it had showed at the start of the race.

There was some white knuckle action between the two McLaren’s with Jenson Button and Sergio Perez arguing for position more than once. Perez misjudged one of their battles mid-race when clipped the back of Button’s McLaren and subsequently suffered front wing damage.

Lewis Hamilton, benefiting from fresher rubber, breezed past Webber to slide into fifth place with six laps to go. Stewards announced they were investigating a collision between Webber and Rosberg.

Webber then returned serve on Hamilton by re-claiming fifth a few laps later.

The Webber/Hamilton battle continued in the shadow of the finish with Hamilton passing the Australian again on the final lap, reflective of a grand prix that delivered a contest to remember.

Webber eventually succumbed to a defiant Perez who claimed sixth place after his mega scrap earlier in the race with Button.