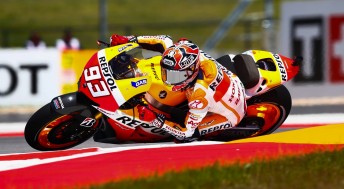 In just the second event of the season MotoGP debutant Marc Màrquez has taken his first ever career pole in Austin.

He was third at Qatar to finish on the podium in his first race and is now the youngest rider to earn a pole position in MotoGP.

The fastest man on Friday continued his fast-paced approach to the Circuit if Americas by posting the top time despite a crash in the morning’s final practice session.

Dani Pedrosa will sit aside Màrquez on the grid, qualifying second, with the factory Yamaha of Jorge Lorenzo qualifying for a front-row start in third, however his time was over a second slower than Màrquez’s.

Cal Crutchlow qualified fourth and was the quickest of the riders not to have tested at the track, pre-season. German Stefan Bradl qualified fifth on his LCR Honda.

The second factory Yamaha of Valentino Rossi could only manage to qualify eighth with his former teammate Nicky Hayden rounding out the top-10 on his Ducati.

Aleix Espargaro once again produced the goods in the CRT class qualifying ninth with Aussie Byran Staring unable to make it past Q1 and will start tomorrow’s race in 22nd.

Earlier in Q1 Staring clashed with Karel Abraham resulting in the Czech rider sustaining a fractured collarbone and Abraham will sit out tomorrow’s race due to the injuries.

“I’m not happy because I’m still trying to get to grips with this track,” said Staring.

“I hope that tomorrow we will be able to make a good start and try and bring home a decent result for the team.”

Check out all the action from the Austin GP live on the 10 Network from 4.30am tomorrow. *check local guides.