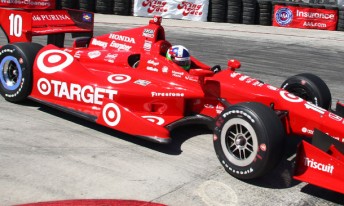 Dario Franchitti will start from the point at Long Beach

Dario Franchitti has shown he still has plenty of fight by scoring pole for the Long Beach IndyCar Grand Prix.

After a frustrating start to the season, it was the Franchitti that people are more accustomed to as he set a new qualifying recorded to beat Ryan Hunter-Reay and Will Power.

Power will start off the front row for the first time since 2008. However, he did go on to win that year.

Starting his 250th IndyCar/Champcar, the Scotsman won his 30th career pole and his first since Toronto last July. 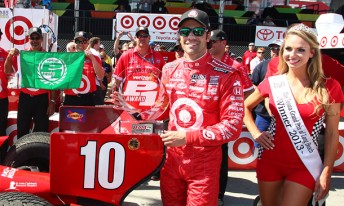 The smile is back for the Scotsman

Franchitti is seeking to break a tie with Sebastien Bourdais and Paul Tracy with his 32nd victory. His last win was the 2012 Indianapolis 500.

“I want to leave nothing on the table and give (race engineer) Chris (Simmons) every bit of feedback that I can,” Franchitti said.

“Those guys will take care of their end of things and I’ll take care of mine. That requires a lot of focus, and sometimes I’m not the funnest person to be around when that happens, but that’s what it takes.”

The Ganassi team could have had two cars in the top six had Scott Dixon not spun and stopped in the middle of Turn 1 late in the first qualifying phase.

The New Zealander was fourth-fastest in his group at that point, but his stranded car – joined moments later by that of Oriol Servia, who arrived in the corner to find the road completely blocked and deliberately drove into the barriers to avoid Dixon – triggered a red flag.

Under series rules, that cost Dixon his two best laps and consigned him to the back of the grid, and Servia, having been deemed equally responsible, was dealt the same punishment.

“My car was still running. I’m sure there were yellows waving,” Dixon said.

“My car was partially blocking the track, but I was pulling away. It is kind of in the middle. It’s a hard call. A tough one. I’m sure if Oriol had seen the yellows and slowed down, maybe he would have gotten around.

“We were solidly in the top six, and it sucks to go out that way. We will have to fight back from way back tomorrow.”

Dixon’s exit should have opened the door for Marco Andretti to advance to the next phase, but he was under scrutiny from race control as well for interfering with JR Hildebrand while the latter was on a fast lap. Andretti, too, was penalised, and Hildebrand progressed in his place.

Top 3 qualifiers speak after the session