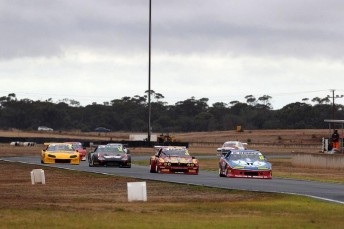 Barnes leads Ricciardello on Lap 1 of the Clem Smith Cup

Jeff Barnes was a surprise winner of the Kerrick Sports Sedan Series’ flagship Clem Smith Cup race at an inclement Mallala after a series of misfortunes hit his more fancied rivals.

Starting from fourth on the grid as a result of his Race 1 finishing position, the Pontiac Firebird driver found himself in the lead of the Cup-awarding Race 2 when Kerry Baily and Shane Bradford spun simultaneously at the Southern Hairpin on the opening lap.

While race favourite Tony Ricciardello swept by Barnes a lap later, contact between the Alfa and a lapped car soon put the West Australian out of the race.

Barnes was never headed for the duration, eventually leading home the Holden Calibra of Daniel Tamasi by six seconds.

Bruce Banks was third ahead of a recovering Baily and Dameon Jameson, whose Jaguar had been repaired on Friday night after catching fire during practice.

Darren Hossack had won the opening race earlier on Sunday morning but suffered from weekend-ending mechanical issues in the feature.

Ricciardello, who had managed just seventh in Race 1 after multiple spins, returned to win the 12 lap Race 3 in the late afternoon by a stunning 24 seconds from Barnes.

Bradford, Baily and Banks again chalked up top five finishes in what was a depleted nine car Race 3 field.

Ricciardello now trails Baily by 21 points in the series standings after two rounds, with Bradford, Banks, Tamasi and Barnes completing the top six. Local driver Michael Almond turned the tables on Saturday night winner Richard Muscat in the opening weekend of the 2013 GT3 Cup Challenge, taking both Sunday races on his way to a maiden round win.

The wet weather caught out Muscat in Race 2, with the Victorian falling out of second position midway through the going with an off at The Esses. He dropped from second to 10th with the mistake, but recovered to fifth by the flag.

Second in the final was enough to ensure Muscat second for the round ahead of the consistent Phil Woodbury.

History making paraplegic driver Matt Speakman managed to see the chequered flag in all three races despite the tricky conditions, which contributed to a spin in the final.

South Australians also triumphed in the Saloon Cars and Swifts, with Wayne King guiding his Holden to a clean sweep of wins in the former category.

Luke Fraser was too good in the Swifts; eventually joined on the round podium by Allan Jarvis and Mike Gore.