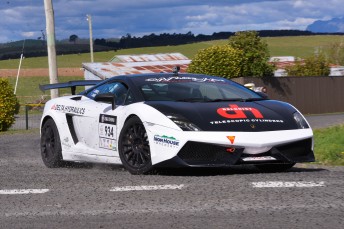 Jason White is on track to take his fourth victory in Targa Tasmania, after a brilliant drive on the penultimate day saw him increase his lead by more than half a minute across the leg’s 132 competitive kilometres.

The Lamborghini Gallardo driver was outright fastest on five of the day’s eight tarmac stages and now leads by 57 seconds with one day to go, as second placed Steve Glenney, in his Nissan GT-R, struggled to keep pace with his arch rival.

Day four of Targa Tasmania took the field from Strahan to Burnie and back, on the testing roads in the state’s north-west.

Jason White has had anything but a trouble-free event in his Italian supercar, but he still looks the man most likely to hold up the winner’s trophy when the event reaches Hobart on Sunday.

“We had a faulty oxygen sensor which caused fuel to get into the oil, but we fixed that and we’ll give it a full oil change tonight,” White said.

“Other than that we’ve had a good afternoon. We’re happy with our lead at this point.”

The overnight leader in Classic Outright, Greg Garwood, retired his Holden Torana A9X with engine problems late in the day, leaving Craig Haysman (1981 Triumph TR7 V8) and Donn Todd (1971 Ford Capri Perana) separated by just 32 seconds, fighting it out for victory on the run to Hobart on the final day.

Television personality, Grant Denyer, is the leader of the Showroom competition in his Renault Megane RS 250.

The fifth and final day of the 22nd Targa Tasmania will see the remaining competitors leave Strahan and head for Hobart over six tarmac stages. The day includes the longest stage of the event, the 58.55 kilometre Mt Arrowsmith test, before the finish at Hobart’s Wrest Point on Sunday afternoon.