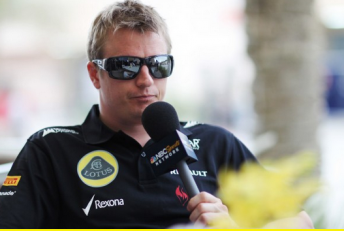 Finn Kimi Raikkonen has muscled out the Red bulls to claim the fastest time in the second practice session for the Bahrain Grand Prix.

Raikkonen set a 1:34.154s lap to edge out Mark Webber who had been on the top perch.

Webber’s team-mate Sebastian Vettel was third fastest, a fraction behind the Australian.

Felipe Massa, the fast man in P1 earlier in the day, was sixth two spots behind his Ferrari team-mate Fernando Alonso.

After turning 35 laps Paul di Resta squeezed decent speed out of the Force India to be fifth fastest.

The McLaren’s of Jenson Button and Sergio Perez were 11th and 13th as the Mercedes team of Nico Rosberg (eighth) and Lewis Hamilton (10th) were also not among the fast group.

There was another incident involving Esteban Gutierrez who came into contact in his Sauber with Charles Pic’s Caterham.