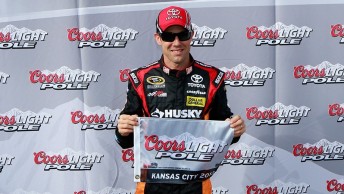 Matt Kenseth has scored his first pole aboard a Toyota

Matt Kenseth has lead four drivers in breaking the track qualifying record at the STP 400 at Kansas Speedway.

Edwards watched in disbelief as Kenseth, the next-to-last driver to make a qualifying attempt, bettered Edwards’ time by .017 seconds to win his first Coors Light pole award in a Joe Gibbs Racing Toyota and the ninth of his career.

“You know, I struggled through (Turns) 1 and 2 all day, and I tried something really different there in qualifying,” said Kenseth.

“I watched Ricky (Stenhouse) and a couple of other guys get through there, and I kind of changed my approach to the corner.

“I knew I got through there pretty good, but I didn’t know it was that good, but, man, I didn’t think I could do any better in three and four. It felt pretty good.”

A tough qualifying run for Jeff Gordon who crashed his Chevrolet SS on his run and failed to complete the lap. He will start at the back of the field in his spare car.

“Yep, I’m fine. Unfortunately the car is not,” said Gordon.

“It felt real good coming through three and four (on the warm-up lap). I wanted to get back to the gas early and hard down there to try to run the lap times that some of these other guys are running, but obviously it didn’t stick.”

After setting the ninth fastest time in practice Australia’s Marcos Ambrose slipped back to 15th in qualifying including a brush with the wall.

“We were great in qualifying practice and we heard everybody was really tight, so we made some adjustments before we went out and it was too free,” said Ambrose.

“We went for a second lap there and I just scuffed the wall and normally when you do that it tightens up, so I stayed in it thinking it was gonna be OK through three and four on the second lap, but it was still too loose.

“We missed it a little bit. We’ll just clean that up and be ready for tomorrow.”