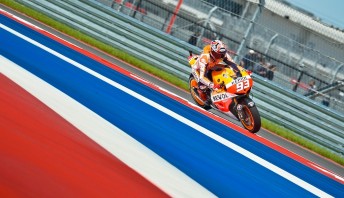 Marc Màrquez has set the pace during practice for the second round of the MotoGP World Championship by laying down the fastest times in both of Friday’s sessions at the Circuit of Americas.

MotoGP’s latest star has continued his form from pre-season testing at the Texan circuit, where the young Spaniard was the rider to catch.

Dani Pedrosa on the sister Honda factory bike was second quickest, half a second behind his teammate with German Stefan Bradl over a second slower than Màrquez’s time, in third.

Màrquez’s blistering lap of 2m05.031 came late in the piece and was over three seconds quicker than his Practice 1 effort which was effected by cold and windy conditions as well as the challenge of the dusty surface and an unfamiliar track.

Jorge Lorenzo and Valentino Rossi were fourth and fifth respectively on the factory Yamahas, albeit over a second and a half slower than the front running Marquez.

Randy de Puniet crashed wildy in the final section of the circuit in Practice 2, but avoided injury despite some scary moments as he balanced on his out-of-control Aprilia while it careered to the ground.

Aleix Espargaro set the CRT pace in 11th while Australian Bryan Staring struggled to get to grips with the new track, setting the 22nd fastest time on the back of his Gresini FTR-Honda.

“Once again it’s all new to me and on this track it’s certainly more difficult,” said Staring.

“It’s a circuit difficult to interpret and in the morning we also had huge problems with grip which did not put me at ease.

“At the end of the day I talked a lot with my team who continue to be a great help and we will continue working on things to improve our times.”