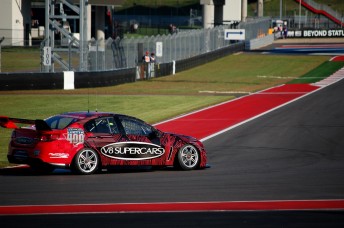 Courtney hitting the track in Austin

James Courtney has officially become the first driver to turn laps of the Circuit of the Americas in Austin, Texas, aboard a V8 Supercar.

Courtney completed a number of demonstration laps in the category’s Chevrolet-badged Car Of The Future prototype during the opening day of the weekend’s MotoGP event at the circuit.

The 2010 V8 Supercars Champion, along with fellow Holden driver Fabian Coulthard, are at the track this weekend for demonstration runs to promote the V8 Supercar race in May.

“OK now that was cool….,” said Courtney via Twitter.

As well as the laps over the course of the MotoGP weekend the pair will be staying-on after the weekend for further guest rides.

The Austin 400 will take place over the May 17-19 weekend on the COTA’s short circuit.