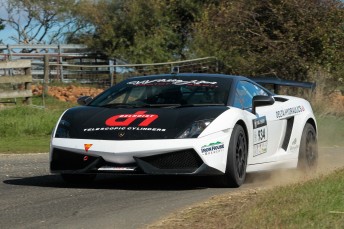 Jason White is back out in front

Jason White has once again stamped his authority on Targa Tasmania with an impressive drive that has seen him regain the lead on day three of the five-day epic rally.

The Lamborghini Gallardo driver started the day with a 17 second deficit to the Nissan GT-R of Steve Glenney, but by the end of the day’s second stage he was back in front, and finished the day with a handy 13 second lead.

Adelaide’s Matt Sim is now third in his Nissan GT-R after Matt Close was forced to withdraw with mechanical troubles. Eight-time Targa winner, Jim Richards, moved up to fourth in his Porsche and eyeing another podium finish.

“Today’s gone well and I don’t think we’ve lost too much time with the troubles we’ve been having,” White said.

“I think sometimes when you have problems like that it causes frustration, which spurs you to drive faster than you normally would.”

But the Porsche driver crashed out of the event on the final stage handing the lead to Greg Garwood, also in a Torana.

The leaderboard in the RDA Brakes Showroom changed late in the day when Adam Spence had an off, handing the lead to the Renault Megane RS 250 of, Grant Denyer.

Day four of Targa Tasmania see competitors tackling a further eight stages from Strahan, up to Burnie and back.