Roland Dane: No team will break away in 2013

Roland Dane: No team will break away in 2013 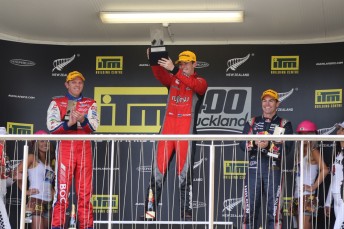 A new face on the podium … Scott McLaughlin celebrates his maiden Championship win on home soil.

With many teams continuing to develop and understand the new technical rule package introduced for this season, Dane says the chopping and changing of winners is set to become a fixture for the remainder of the year.

This latest prediction is in line with Dane’s recent statement that his Red Bull Commodore fighters have lost their enduring mantle as the premier team.

“It is still ebbing and flowing like mad,” Dane told Speedcafe.com.

“Even during the races – lap-to-lap – its ebbing and flowing.

“I think it will go on all year because it’s just the nature of the cars now.

“Having such real depth in the driving field in terms of skill it will continue.

:I just don’t see anyone getting out in front and staying there.”

BJR drivers Jason Bright and Fabian Coulthard (two wins each) hold the balance of power in the nine championship races run to date.

Although this statistic gathers even more speed when Coulthard’s triple treat of victories at the non-championship AGP meeting is included, the prognosis from Dane is that BJR’s edge may be on borrowed time.

“The fastest cars at the moment undoubtedly are ours, BJR and FPR and that is reflected in the results and qualifying performances,” he said.

The Holden Racing Team are advancing incrementally in their process of trying to climb back into competitive form however its strike driver Garth Tander admits that BJR is the team everyone is chasing after their cracking start to the season.

“I think it’s entirely accurate that no-one has really found their level yet but I do admit BJR has found a level that is better than everyone else’s,” Tander told Speedcafe.com

“The rest of us are getting closer but those guys have made some mistakes along the way that have cost them considerable points.

“It’s all well and good to have a fast car but if you are not scoring points then its not going to help you later in the year.”

Quite opposed to Dane’s thoughts, Tander has indicated that as the year progresses teams will eventually find their level.