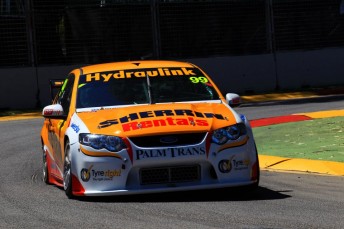 Steve Owen is being tipped as the man most likely to take over Chaz Mostert’s Dunlop Series ride with Matthew White Motorsport after the latter’s graduation to the V8 Supercars Championship with Dick Johnson Racing.

Mostert, who remains contracted to Ford Performance Racing, will complete the rest of the year with DJR under a deal announced this morning.

Owen is already confirmed at FPR alongside Will Davison for the endurance races after signing a two-year deal with the factory squad earlier this month.

Mostert’s move could pave the way for the 2008 and 2010 Dunlop Series winner Owen to gain valuable miles prior to the enduros during a year in which he does not have a full-time ride in any series.

MW Motorsport team principal Matthew White confirmed to Speedcafe.com that his squad has been in contact with Owen, but said it was too early to confirm any driver in the seat.

Mostert’s move to DJR also leaves vacant his V8 Supercars Championship endurance drive with FPR, where he was to share with Alex Davison.

Dale Wood, who competes with MWM in the Dunlop Series, could be thought of as a logical candidate for the position, but told Speedcafe.com today that he has no confirmed endurance drive and is in danger of missing out entirely this year.

Meanwhile, FPR is expected to play a role in deciding Mostert’s endurance co-driver at DJR under the increased tie-up between the two squads.

DJR’s co-driver roster will almost certainly include its general manager Steven Johnson, who had previously been in discussions with outside squads.