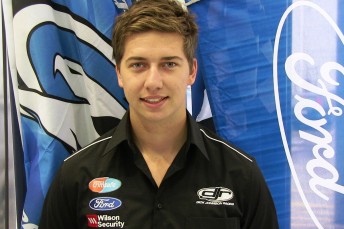 Chaz Mostert will make his V8 Supercars Championship debut at Barbagallo next month with the struggling Dick Johnson Racing outfit.

The Ford Performance Racing-contracted driver replaces Kiwi Jonny Reid in the ride for the remainder of the season after just three championship events.

The deal will also see FPR engineer Adam De Borre, who has been working with DJR as a customer support engineer, move into the role of race engineer on the #12 Ford.

“I can’t believe I am getting the chance to make my main series debut as I hadn’t expected it this year, but Perth is a great place to debut as I really like racing there,” said Mostert in a team statement.

“The whole thing is a bit surreal. I’ve been pretty speechless since I found out, though to stay in the Ford and FPR family network is special and to race for the iconic DJR is a dream.

“There will be so many things that I haven’t experienced before as the championship series is the big time, but the biggest box I want to tick is to show that I am fast enough to belong. I want to learn as much as I can racing with the more established guys.”

Added DJR principal Dick Johnson: “We have made this change to our driver line up quite early in the season but we know Chaz will be a great partner to Tim (Blanchard) and the added input from FPR is the right move for DJR.

“Make no doubt about it; Jonny Reid is a very talented driver. In hindsight, it may have been better to run him through a season in the Dunlop Series, but I have no doubt he will emerge again in this championship.”

Reid sits at the bottom of the 28 strong V8 Supercars Championship points standings, five places behind Blanchard, after Pukekohe.

Mostert has been released from his Dunlop Series commitments with Matthew White Motorsport for the remainder of the season.