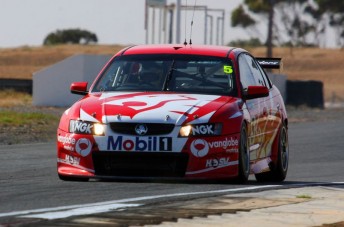 Holden driver Matthew Hansen has set the pace over his more fancied Ford rivals in practice for Round 2 of the Kumho V8 Touring Car Series at Mallala.

The Kumho entries completed three 20 minute practice sessions on the opening day of the Shannons Nationals event in South Australia.

Hansen set his fastest time of 1:10.59s in the opening session, which proved a full 0.8s faster than the best managed by the day’s second fastest man, Terry Wyhoon.

Points leader Shae Davies was third ahead of fellow Ford driver Chris Smerdon and the Holdens of Jim Pollicina and Ian Yeing.

Peter Fitzgerald was seventh fastest in his return to the series, while paraplegic racer Matthew Speakman was 12th, some 6.5s from the pace.

As usual, rivals Tony Ricciardello and Darren Hossack sized each other up in practice for the Kerrick Sports Sedans.

Ricciardello clocked a best of 1:07.32s in his Alfa to be 0.4s quicker than the Audi, with the best of the rest, Kerry Baily, almost two seconds further back in third.

There was drama meanwhile for Dameon Jameson, whose Jaguar was not seen for the remainder of the day after catching fire in Practice 1.