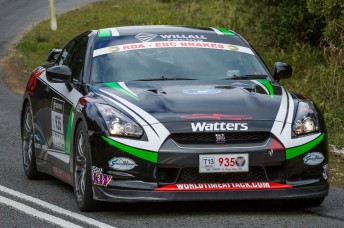 Steve Glenney is out front at Targa Tasmania

Steve Glenney has taken the lead of Targa Tasmania after the second day of competition as overnight leader Jason White hit trouble over the eight tarmac stages in the north east of the state.

Driving a 2009 Nissan GT-R, the 2008 event winner overcame a 20 second deficit at the start of the day to finish with a 17 second buffer over the White’s Lamborghini.

Day 2 of Targa Tasmania ran over some of the most popular Targa stages, including Elephant Pass and The Sideling, heading out to St Helens and back before finishing with a stage around the streets of Longford.

Devonport’s Jason White had hoped to extend his 20 second buffer over the dry stages, however the front diff on his Lamborghini broke on the Elephant Pass test, just the second of the day, restricting the car to rear-wheel drive for the remainder of the day.

This was the break Glenney needed, and he set out to make the most of his rival’s problems, finishing the day 17 seconds to the advantage.

“We’re feeling much more comfortable today, as we’ve been working on the suspension and we’ve found a good balance. It’s really enabled me to press on a bit more,” said Glenney.

“When we heard that the Whites had problems with the Lambo we backed off a little bit and it gave us breathing space to problem solve our own issues. It really helped us to get on top of some of our little glitches.

“We’ve got a plan to fix them tonight, and hopefully Jason (White) can get his diff fixed and we can go hammer and tongs for the rest of the week.”

White was philosophical at day’s end, hopeful that he could claw his way back to the lead over the final three days.

“It’s awesome to be so close, considering we’ve only had two-wheel drive,” White said.

“It took every ounce of our concentration to keep in touch today. It’s not a good situation to be in.

“It was a new diff and we have to find out exactly what is broken, and weigh it up from there, but we’ll be back tomorrow with a fresh diff, but we may have to go a bit easier if we find something that’s a bit frail.

“To be within 17 seconds of the lead at any part of this event, right down to the last couple of stages, is an acceptable place to be.”

Victorian Matt Close (Audi TT RS) has maintained his third place, but is just 34 seconds behind White. His advantage over fourth placed Matt Sims in a Nissan GT-R is nearly a minute, with the similar car of Frank Purdey a further 48 seconds back in fifth.

The battle for the Classic Outright crown intensified during the day as Peter O’Keefe and Greg Garwood, both in Holden Torana A9Xs, fought off the challenge from the Porsche of Rex Broadbent.

Renault Meganes continue to dominate the Showroom competition, with Adam Spence a clear leader ahead of TV personality, Grant Denyer.

The first five places are still held by Renault Megane RS 250s, with motoring journalist Mike Sinclair third and still in the running for victory should either Spence or Denyer hit trouble.